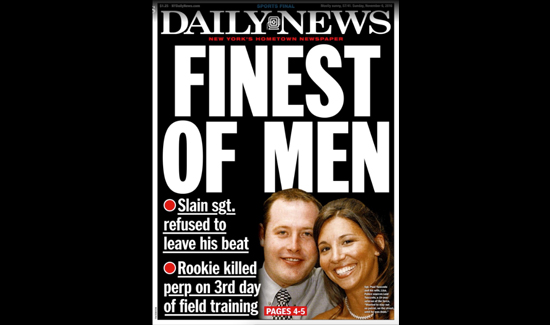 Killed in a gunfight in the Bronx last Friday , Sergeant Tuozzolo (pictured above with his wife, Lisa) was a 19-year veteran of the New York Police Department and had spent the past decade assigned to the 43rd Precinct in the Bronx.

Sergeant Tuozzolo, the first New York police officer to be killed in the line of duty since October 2015, was a lifelong fisherman and a genial, low-key presence in the precinct, said Sgt. James Kelly, who worked with him in the Bronx for nine years. “He wasn’t the one telling the jokes, he was the one laughing,” Sergeant Kelly said. “He was just a really good guy.”

Paul Tuozzolo was raised in Bayville, N.Y., a waterfront village that borders Long Island Sound, Sergeant Tuozzolo moved about six years ago to the larger town of Huntington, where he and his wife, Lisa, were raising their two sons, both of whom are under the age of five. On Saturday, his neighbors on Cutting Street, a quiet, tree-lined byway, remembered him as a good father and a decent man.

“He’s always over there playing with his kids,” Danny Clarke, a tennis coach who lives on the block, said. “He’s a family guy, you know?” Mr. Clarke added: “I don’t know how they’re going to get through this.”

Condolences for Sergeant Tuozzolo, who was 41 and would have been eligible to retire next year, poured in from all corners after the shooting. He was mourned on Twitter by police departments in California, Massachusetts, Michigan, New Jersey and Pennsylvania.

In New York, Mayor Bill de Blasio announced that flags at all city buildings would fly at half-staff from Saturday until Sergeant Tuozzolo’s burial, which had not yet been scheduled.

At a vigil for Sergeant Tuozzolo, a pipe and drum band played and the speakers included Ed Mullins, president of the Sergeants Benevolent Association.

He said that Sergeant Tuozzolo was “very calm, a level-headed leader” who was “ highly respected” by those he supervised and by “all those above him.”

“In my view,” Mullins added, “deep down inside,” Sergeant Tuozzolo was “always a worrier. He addressed the situation with everything against him and didn’t back down and did what he had to do to help someone else.”

On Saturday morning, Patrick J. Lynch, president of the Patrolmen’s Benevolent Association brought flowers to Sergeant Tuozzolo’s station house, which was draped in blue-and-black funeral bunting. Candles and blue balloons had been placed near a wall outside as a memorial.

Mr. Lynch said Sergeant Tuozzolo had reported to work on Friday expecting to do what he had always done: “Go out, do a noble profession, do a noble job, go home at the end of the day.” But, he added, “in policing, that doesn’t always happen.”