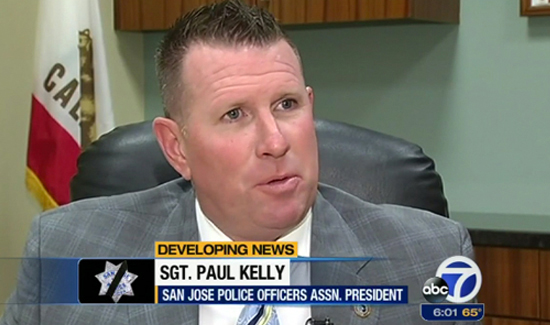 Via The San Jose Mercury News:

SANTA CLARA — Amid wide-reaching tensions hovering over the NFL about on-field national anthem protests, the team where everything started is trying to move the conversation beyond the current stalemate by joining forces with a group of big-city police unions.

Thursday, the San Francisco 49ers and representatives of police unions from San Jose, Oakland, New York, Los Angeles, Sacramento, Long Beach and Portland will detail a broad agenda to address police-community acrimony across the country that are at the heart of the ongoing on-field protests that have far transcended the professional ranks.

That agenda is highlighted by a commitment from the 49ers to bankroll the production of a series of public-service announcements to be broadcast nationally to promote better relationships between law-enforcement and residents wary, and weary, of police violence.

In a joint statement, the team and the police-union coalition mentioned the collective need to improve a situation that has pitted NFL players against swaths of fans and in some cases their own management.

“The duty of law enforcement must also include actively participating in bringing our nation together and working to foster a more understanding and compassionate national dialogue around community and police officer relations,” the statement reads. “We believe that professional sports teams should utilize their capacity to reach millions of Americans to promote initiatives that help law enforcement professionals and the citizens they serve understand their respective experiences and to listen to one another with an open mind and heart.”

The need to voice that sentiment is born from the fall of 2016 when then-49ers quarterback Colin Kaepernick first sat, then kneeled during the playing of the national anthem to protest the killings of unarmed black men and women at the hands of law enforcement. His gesture gained traction over the course of that season and was galvanized league-wide this year after President Trump insulted protesting players and suggested they be fired for insubordination.

Kapernick is currently pursuing a collusion case against the NFL, alleging that the league has uniformly retaliated against him for his protest.

Sgt. Paul Kelly, president of the San Jose Police Officers’ Association, said he and his colleagues decided to take tangible steps after hearing rhetoric but no significant action from the league.

“We in law enforcement, and probably many people, have listened to them, seen them take knees, and talk about items they feel strongly about,” Kelly said. “Nothing’s been done. Not by the NFL, not by the owners, or the commissioner. We actually want to sit down and take concrete steps to keep law enforcement safer, and the community safer, and do that with their support starting with Jed York.”

The platform being put forth by the 49ers and the police unions is a medley of semi-related causes. Besides the PSA outreach component, they are throwing their support behind either legislation or federal regulatory changes to ban armor-piercing bullets, gun silencers, and most prominently, “bump stocks” that modify legal firearms to simulate automatic weapons. The devices gained infamy after they were used by Stephen Paddock, the shooter responsible for the Las Vegas massacre on Oct. 1.

In the partnership statement, the groups also aim to “dedicate the necessary resources to strive to make every encounter between an American police officer and the citizens they serve to be grounded in mutual respect; to advocate for common-sense local, state and federal legislation that will contribute to the safety of all Americans, and to work together to improve the national dialogue around race, policing and violence prevention.”