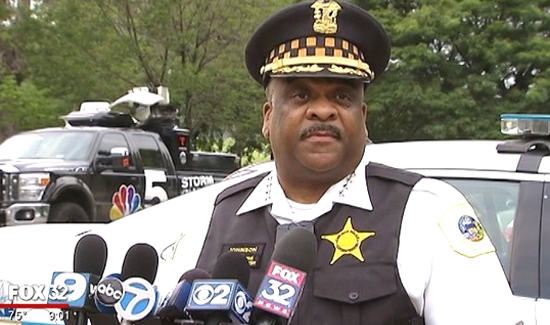 The following script is from “Crisis in Chicago,” which aired on Jan. 1, 2017. Bill Whitaker is the correspondent. Andrew Bast, Guy Campanile and Michael Radutzky, producers.

The number of casualties in Chicago since last New Year’s Day has surged to a level more in line with a war zone than one of America’s great cities. More than 700 people were murdered. Over 4,000 shot. That’s more than Los Angeles and New York combined.

Gangs, guns and drugs have caused chaos in Chicago for years. But something new caught our attention. There’s been a drop in the kind of police work that law enforcement says is critical to preventing crime. Usually stops and arrests go up when violence is rising. So we went to Chicago to look for an explanation. What we found was a police department on its heels as the city suffered its worst bloodshed in 18 years.

In the six days we were in Chicago, 55 people were shot, 16 were killed. We were struck by just how routine it all felt. The dead and wounded were removed with grim efficiency—right down to the HAZMAT crews that cleaned away the blood. Murder seemed almost normal.

Michael Pfleger: And now we are the poster boy of violence in America.

Michael Pfleger is pastor of St. Sabina Church on Chicago’s South Side. His congregation started summer weekends by praying for a low body count.

Michael Pfleger: I had three families—three different families call in one day asking to do the funeral of their child that was killed in the last week. I’ve never had that in 41 years here. Three families in one day.

Fifty-nine gangs are at war over territory and drugs on Chicago’s West and South Sides. But the makeshift memorials we saw, also mark places where people were killed in gang initiations or over petty insults. This gang member was taunting a rival on his phone live on the Internet when he was shot. Watch and you’ll see the gunman.

Bill Whitaker: What’s it like here on a typical Saturday night these days?

Michael Pfleger: I’ve never seen there to be a combination of anger, distrust, and a feeling like communities have been abandoned.

Michael Pfleger: Shame on us that our children are afraid to go out of their house of being shot and killed. When is the tipping point, do we all say, enough?

But we were astonished by data we obtained from inside the police department. It revealed that as killings rose, police activity fell. In August of 2015, cops stopped and questioned 49,257 people. A year later those stops dropped to 8,859, down 80 percent. At the same time arrests were off by a third, from just over 10,000 to 6,900.

Bill Whitaker: You talk to cops every day.

Brian Warner: We do.

Brian Warner: Lowest it’s ever been.

Brian Warner is a former Chicago cop. He was shot in 2011. Now Warner counsels officers suffering from extreme stress. He explained what a dozen beat cops told us off-camera: they had stepped back.

Brian Warner: You have a 911 call, you go to your 911 call. But if you’re one—aggressive patrol when you’re out looking for people breaking the law. That’s not happening as much as it was.

Bill Whitaker: You say they’re not being as proactive?

Brian Warner: No. They’re not. And how could you ask them to be? And why would you expect them to be?

Bill Whitaker: Because it’s their job. They signed on to do that.

Brian Warner: It’s my job to go to work and listen to your 911 calls and respond. That’s the basic ability of my job. So if you want me to do the basics that’s what I am doing now.

Garry McCarthy: The police activity is horrific. Honestly. And there, and there’s not an excuse that could be made in my book.

We showed the stop and arrest data that we got to Garry McCarthy. He was superintendent of the Chicago Police Department until just a year ago.

Garry McCarthy: When you have activity falling off the way it is and crime skyrocketing, that’s a huge problem.

Bill Whitaker: Some people, looking at the Chicago Police Department have said it’s in crisis.

Garry McCarthy: Crisis is a good word. When people are dying, yes, there’s crisis. No two ways about it.