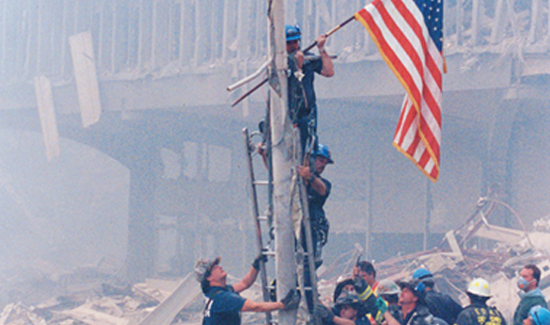 Editor’s Note: Tomorrow is the 17th anniversary of the attacks of September 11, 2001. Sadly, even now the Ground Zero first responders continue to suffer devastating health effects and are still struggling to get the emotional and financial support they need. It’s important that we revisit the tragedy and heroism of that day and its aftermath, and remember all those who offered their strength when our nation needed it most.

When the first plane hit the World Trade Center, Rich Miller was sound asleep. He was scheduled to attend a diver rescue training exercise at noon and was using the rare free morning to get some extra rest. When his wife woke him and told him what happened, he ran into the living room just in time to see the second plane smash into the South Tower. He threw on some clothes, kissed his wife and youngest daughter Nikki goodbye, jumped in his car and drove straight to the Bronx.

When he pulled into the police station parking lot, he saw John McCullough. The two men found a pickup truck loaded up with rescue equipment and quickly headed toward the Trade Center. As they raced down the West Side Highway, the North Tower began to fall.

“Before that happened, voices were coming through pretty clear over the division radios,” Rich recalled. “I could even recognize certain people. But when the North Tower fell, there was dead silence.”

As they got closer and the streets became narrower, Rich remembers people jumping out of the way when they saw the pickup truck piled with equipment. “It was like the sea was parting,” he said.

When a major disaster occurs in New York City with hundreds, if not thousands, of possible fatalities and injuries, every available officer assigned to the Emergency Service Unit gets his or her equipment and reports to the command post. When Miller and McCullough got down to the site, ESU commanders had already assembled several rescue teams to go into the rubble and start saving lives. By this time, the Pentagon had been hit and everyone was preparing for the worst.

Despite the catastrophe unfolding before them, ESU officers grabbed their entry tools and medical bags and rushed toward the towers. Just as the cops from Team Five entered the South Tower, the building fell and buried the six-member team. Miraculously, they dug themselves out, regrouped, and went back into rescue mode. While every other person was running away, the cops and firefighters were going back in.

As Team Five returned to the North Tower, steel girders began to fall. Then came the bodies, people who decided to leap to their deaths rather than be enveloped in fire. There was blinding dust and horrendous noise. Members of Team Five had lost all their equipment, and they could barely see. Along with a group of firefighters and other police officers, they managed to form a human chain. As soon as they were lined up, they began passing traumatized and injured people down the line, one to the next, until they were safely out.

It was only twenty-nine minutes after the first tower collapsed when the North Tower started to go. “Debris was literally raining,” Richie Hartigan recalled. Richie frequently partnered with Rich Miller and was one of the officers on Team Five.

“The ground was heaving like an earthquake,” Hartigan continued. “Steel was crashing down everywhere. I cannot describe how loud it was. It sounded like two freight trains coming right at you. You couldn’t see your hand in front of your face. Everyone was choking on the dust. Shards of glass were everywhere.”

Death was random. Who lived and who died all came down to luck. Some made it out, some didn’t. The NYPD lost 23 officers in the World Trade Center attacks. That included fourteen of twenty-nine Emergency Service officers who ran into the buildings but never came out. Three members of Team Five were taken to the hospital with serious injuries, including a lieutenant whose hand was almost completely severed.

Rich said everywhere you looked there were fires. “The smoke and dust were awful. We were worried about so many innocent victims and our buddies who still had not come out.”

Miller and his team were instructed to go as far down into the wreckage as possible. “We hoped we would find people who were still alive,” he recalled. “Three or four floors below street level, we began using hydraulic entry tools to cut into the vehicles. We thought the steel around the car might have protected them, but we never found anybody.”

Despite the grim situation, it took a long time before Rich and his fellow officers faced the reality that many of their colleagues were not coming out alive. “We really believed we were going to find them,” he said. “We wanted them to see the American flag waving when they came out.”

The Department had set up a command center at the Stuyvesant High School a couple of blocks north of the Trade Center. Rich remembered seeing a flag on the stage in the school’s auditorium. That’s the flag, he thought, we will fly at Ground Zero.

The following morning Rich and his team were back conducting searches in the third-floor subbasements of the collapsed towers. “At some point we decided to crawl back up to street level,” he said. “We were climbing over this huge pile of debris on all fours. As we made our way up toward Buildings Four and Five, we came across this gigantic crater. That’s when I saw the bronze globe that stood between the South and North Towers. It was damaged but still intact. Lying next to it was an antenna from the North Tower.”

Rich turned to Richie Hartigan. “That’s our flagpole,” he said.

After asking Thomas Purtell, Chief of the Special Operations Division, for permission to take the flag from the Stuyvesant High School back to the site, the two officers found a pickup truck. They got as far as Church and Dey before a mass of fallen debris forced them to stop. Carrying the folded flag on his shoulder, Rich almost lost his balance walking across a steel beam trying to get back to the antenna.

Rich asked a battalion chief to help him find a ladder. Two firefighters quickly got one from their truck. With Richie Hartigan behind him, Rich climbed the ladder and attached the flag to the antenna. As the battalion chief yelled out, “Present arms,” there was dead silence. Everyone stopped and saluted the flag fluttering in the gray dust and wind.

“Everyone there helped get that flag up,” Rich said, “police officers, firefighters, construction workers, ironworkers, and medical personnel. Richie Hartigan and I were the ones up on the ladder, but they were all right behind us. After our flag went up, each time we came above ground, more flags were flying. The day after that, there were hundreds of flags. If our flag inspired other flags to go up and those flags inspired a nation, I am proud to have been a part of that. Our country had taken a heavy hit, but seeing all those American flags made me confident we would survive and we would rebuild.”

Adapted from the book Brave Hearts by Cynthia Brown.