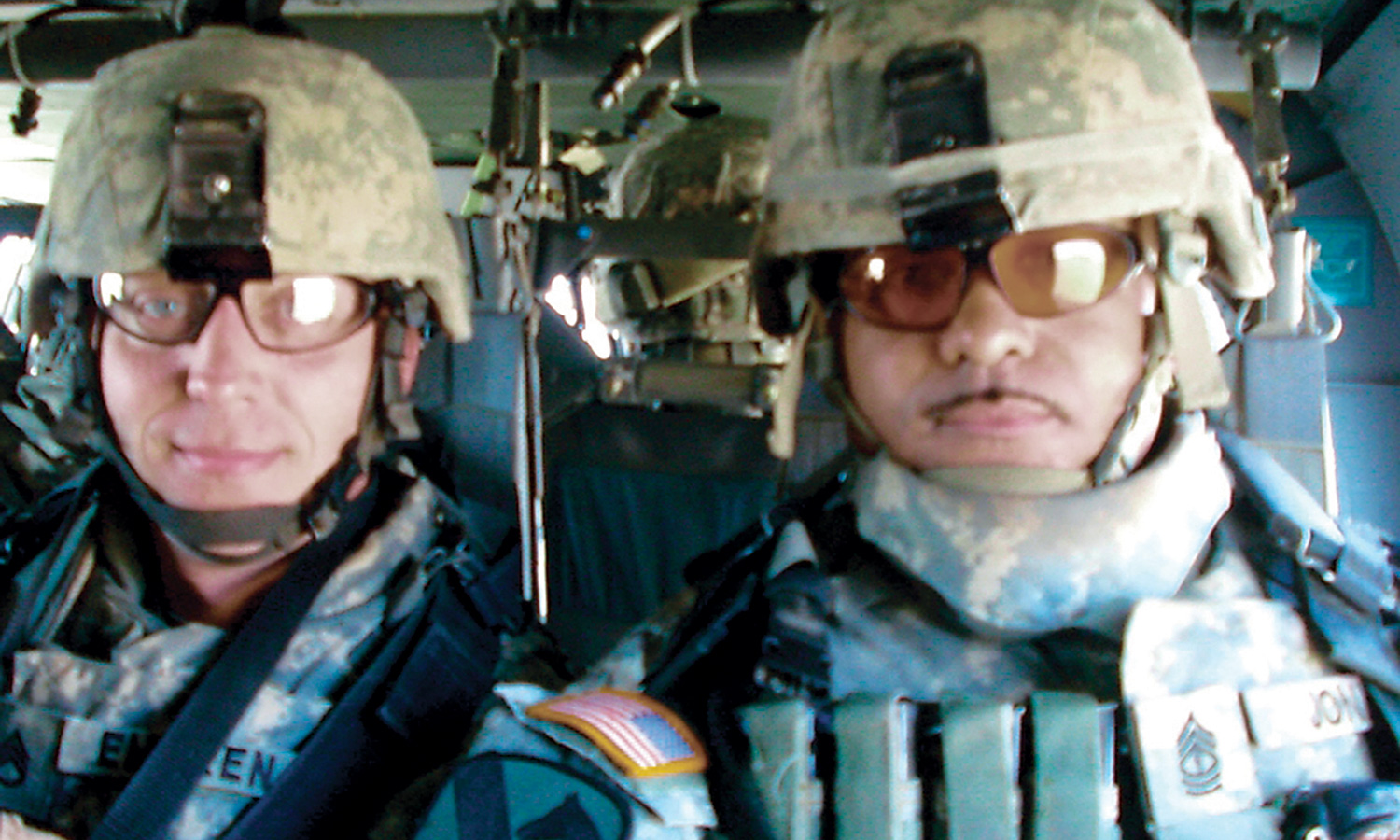 One officer’s commitment to law enforcement and his country

A cop serves, protects and then, hopefully, retires to a safe, comfortable life. Well, maybe.

Frank came to the Philadelphia Police Department after 19 years as a soldier, a 24-year career with the Port Authority of New York and New Jersey Police Department (PAPD) and a tour of duty in the Iraq War. Retiring from one law enforcement agency and moving on to another is not unheard of, but retiring after being a long-time, active street cop and joining another large, urban police department as a street cop is not the normal career move. It is a strange metamorphosis that some police officials suggest is unusual.

But Frank is not your usual cop.

“I thought he was nuts,” Philadelphia Police Academy classmate Chris Burton recalls of his first thoughts upon meeting the then 49-year-old Philly rookie, adding, “He came from a great police department with a great pension.” Burton soon learned that “Frank is a real people guy, a cop’s cop. He asked to work in a busy district and was assigned to the 35th,” adding, “Frank is the type of cop all cops know. Shit seems to find him.”

Paul Nunziato, president of the Port Authority Police Benevolent Association (PBA), Frank’s former union, was more pointed when he asked Frank, “Are you stupid or worse?” The union boss, who is always happy when one of his cops is fortunate to retire, a privilege denied many, didn’t hold back his concern. “You survived a police department that has been attacked by foreign enemies, you survived the September 11th World Trade Center horror and you survived hundreds of felony arrests. Do you really want to tempt fate?” It wasn’t long before fate took up the challenge.

With less than two months on the streets of Philadelphia, Frank responded to a report of “someone breaking in” at a Northwest Philly residence. Frank was met with gunfire as he approached the house. He was able to contact the shooter, a female, who admitted shooting at Frank through the door. She was taken into custody and a search warrant resulted in the recovery of a 9mm semi-automatic pistol used in the shooting and linked to a past homicide and two other shootings. Fortunately, Frank was not injured. He was back in his element. But fate still wanted to play.

On the evening of March 23, 2019, as Frank walked across Broad Street after leaving the 35th District station house, he was run down by a vehicle. Frank was hospitalized for 30 days with multiple serious injuries. Burton recalls Frank saying, “I’ve been blown up plenty of times and shot at. I thought to myself, ‘Is it really going to be a car that gets me on Broad Street in Philly?’”

Frank presents himself as a quiet, relaxed and thoughtful individual who gives no hint of his extraordinary journey. Retiring from the PAPD and jumping back into police work was not Frank’s intention. After spending 24 years with the PAPD — the police department with the unfortunate distinction of having suffered the most line of duty deaths in a single incident; 37 officers were killed on September 11, 2001, at the World Trade Center — he came to think his time was up. He was also concerned about the negative police stereotype the current public discourse is creating. Frank, who earned bachelor’s and master’s degrees in criminal justice along the way, wanted to remain productive and relevant, yet was not interested in being a teacher or holding down an office job. Frank’s former Army command sergeant major, Richard Jones, a Philadelphia police sergeant, told Frank he should consider testing for the Philadelphia Police Department. Frank thought Jones was crazy, but, when he found out the Philly P.D. didn’t practice ageism, he reluctantly gave it a shot. Soon after, he was appointed to the academy.

Sergeant Jones, a 28-year Philadelphia cop, served with Frank in Iraq as his immediate supervisor. He recalled that Frank’s team captain was relieved of command (for reasons he couldn’t divulge) and replaced by Frank, a staff sergeant in a captain’s position. “Frank could have outperformed any captain in our company; he has a desire to serve. We went through a lot together in Iraq,” Jones said.

Frank had no problem adjusting to the Philadelphia P.D. culture along with Pennsylvania’s laws and procedures. Sergeant Jones explained that Frank came to the Philadelphia Police Department with a wealth of law enforcement experience. As a Port Authority cop, Frank had to know and be proficient in the laws and procedures of New York and New Jersey. So to Frank, adjusting to another system was simply a standard operating procedure.

Jimmy Craig, a fellow 35th District cop, met Frank after transferring into the district. Craig, with nine years on the job, said, “I thought it a little bit weird he was starting all over.” After working with him, he came to know Frank as “a guy you can always count on and back you up, has tremendous experience and knows what he’s doing.” Craig furthered the point, saying, “Frank is really good for morale, always in a good mood, which gets everyone’s mood up, a really good cop.”
Brian Ahern, a Port Authority PBA trustee who worked with Frank for 12 years, echoed Craig’s words when he shared a recollection of an autumn Sunday when almost the entire tour at Frank’s last PAPD command was forced to holdover. The forcing didn’t get to Frank because of his seniority, but that didn’t stop him from anonymously buying dinner for the entire tour. Ahern learned that Frank paid for the meals and confronted him. Frank countered that he felt bad for the cops who couldn’t be with their families that evening. Ahern added other examples of Frank putting his brothers and sisters before himself, citing numerous times when Frank would stay past his tour and help cops with arrest paperwork. Frank, who had the reputation as a knowledgeable, active cop, used his experience as the command’s court liaison officer to make sure all went smooth for his co-workers, especially with difficult, complicated cases.

Port Authority cops can’t talk about Frank’s concern for his fellow officers without reminiscing about some of his exploits. Like the time Frank received a broadcast description of an armed robbery suspect in Midtown Manhattan. Frank spotted the suspect and, without backup, took him into custody and recovered the weapon. Or when he found himself in a residential neighborhood in New Jersey searching for a suspect who committed an armed robbery at a local supermarket. Frank located the suspect hiding in some underbrush and arrested him after a violent struggle. And then there was the episode when he faced off with eight gang members who viciously assaulted a homeless man on Manhattan’s West Side. Without additional officers on the scene, he arrested all eight suspects. That case became one of New York State’s first successful gang assault prosecutions.

Throughout his PAPD career, Frank shared information he developed from patrol with PAPD detective squads. One such case, arising from a motor vehicle stop, saw Frank being assigned to a narcotics task force and resulted in the dismantling of a major drug operation. Frank’s abilities to develop critical intelligence was even noted in his Bronze Star narrative: “SSG Emblen’s reporting accuracy, frankness, judgment and advice were highly valued by the Brigade Combat Team commander. SSG Emblen produced some of the most reliable atmospherics in his area.”

Frank may best be summed up by the words of his former union boss, Nunziato, a cop with more than 30 years of experience, who said, “I have never seen a more dedicated cop than Frank. He is not only committed to protecting citizens and his fellow officers with the same dedicated passion, but he is also willing to go out of his way to help an officer or a total stranger with equal compassion.”

Maybe Frank and the Philadelphia P.D. are on to something. We have seen age become less of an issue in law enforcement. What we haven’t seen, though, is states and agencies acknowledging the value of a retired cop’s training and experience to continue to serve. Think about it: A lawyer, doctor, clergyman or any trained professional can retire yet remain a lawyer, a doctor, a clergyman, etc. However, the minute a cop retires, they are stripped of all certifications and authority and treated with a total disregard for their years of experience. And what of the economic impact of the hundreds of thousands of training dollars spent on each officer throughout their career? That training investment is, for the most part, an enormous untapped resource that could represent tremendous value to the law enforcement community. Frank’s desire to serve at the operational level may very well become part of a new way of thinking in law enforcement, especially now as agencies throughout the nation are facing difficulty attracting qualified entry-level candidates.

In the meantime, Frank continues to heal from his collision with fate and looks forward to, once again, returning to the street and serving the people of Philadelphia.