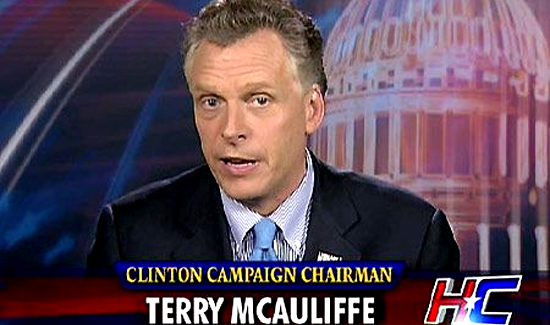 The governor’s comments came during a daylong forum held at Hampton University to discuss how to improve relationships between law enforcement agencies and the communities they serve. The event attracted speakers from as far away as Pennsylvania and Ohio and involved more than 200 police from throughout Virginia.

Here’s the first half of the set-up.

“I cannot convince a (chief executive officer) of a company somewhere around the globe to move to Virginia if we don’t have a reputation as having safe communities,” the governor said. “So you’re so integral in what we’re doing.”

Wait, it gets better:

“It’s important for you to know how you fit in when I talk about building the new Virginia economy,” he continued. “It all comes down to jobs and economic development.”

“One instance, one bad thing in our communities could totally upend all that—that’s why this conference you’re having here today is so important,” McAuliffe said.

Of course, the thick-as-chowder irony here was this was said at a conference designed to help law enforcement better connect with the communities they protect and serve.

So the non-talking point/B.S. version of McAuliffe’s speech is essentially what it’s always been: get out there and crack some heads until people feel safe. But be really nice while you’re doing it. And if you screw up, you’re on your own.

We live in a Marketing and Web society now – so use it. Clearly and concisely explain why things are the way they are, and cause and effect with detail to back it up. A great example is why people aren’t allowed to film police. No one seems to understand why. Explain it on a web page and ramp up the google index.