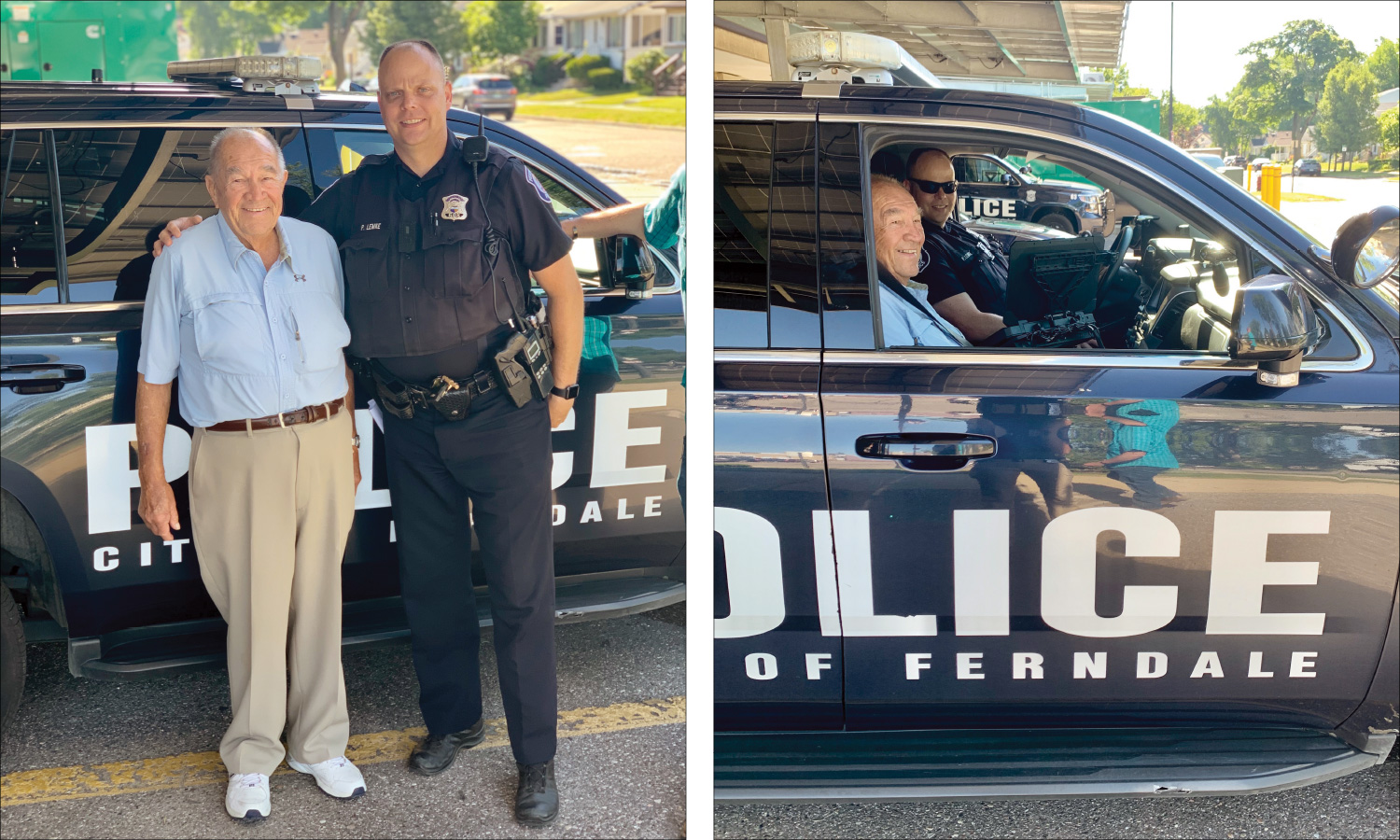 In many ways, being a police officer is a lot like riding a bike. No matter how long it’s been since an officer last put on the uniform, it doesn’t take much for the memories, quick instincts and love for the job to come flooding back.

More than a half century after retiring from the Ferndale Police Department in Michigan, 90-year-old Thomas Kurkowski, who later became an investigator for the state department, had the unique opportunity to relive what it’s like being a Ferndale police officer by going on a ride-along on a recent summer afternoon.

Making the outing even more special was the officer who was driving. Officer Patrick Lemke, the officer who took Kurkowski on the ride-along, was the son of Kurkowski’s patrol partner back in the day, Theodore Lemke.

“There’s been a lot of changes since I left here,” Kurkowski told the Daily Tribune. “In the old days we always had to wear a hat and a tie, and long sleeves even in the summer.”

Kurkowski, who earned $75 a week when he first started in 1957, says that his patrol car used to not have air conditioning and that any officer caught not wearing their hat immediately lost a scheduled day off. Only once did Kurkowski get caught not donning his police cap, which came after a lieutenant spotted him not wearing it while filling out call reports in his patrol car. He made sure it never happened again.

Cruising around town with Officer Lemke made Kurkowski think back on many of the vivid memories he still has of being an officer. “I was really proud to be a policeman in the city of Ferndale,” he says. “Police officers were respected back then, and everybody waved at you.”

One of the areas the pair drove through brought Kurkowski right back to an encounter he had as a young officer in the 1960s. Out during the late hours of the night, he and his partner got a call that a nearby oil company office was being burglarized. Kurkowski and his partner raced to the scene and arrived right when five men were loading a large safe into the back of their car. Although the men all ran their separate ways when the duo got out of their police car, Kurkowski tracked down one of the suspects and shots were fired. The suspect fled and ran down an alley and into a residential back yard.

“I was looking in the yards,” he recalled. “There was a freshly painted vacant house for sale and I saw a back window was open. I got halfway in the window and this guy comes charging at me. I said, ‘Stop or I’ll shoot.’”

Together with another officer who arrived at the scene, the officers got the fleeing suspect down on the ground and threw handcuffs on him. Not long after, the other four men were also captured. Kurkowski later discovered that the suspect he nabbed was out on bond after being charged with burglarizing a U.S. post office.

“He injured five guys in the post office break-in,” Kurkowski said. “He was a steel worker by day and a burglar by night.

When Kurkowski was finished taking a trip down memory lane, Lemke brought Kurkowski back to the station he served at for more than a decade, where he met Police Chief Vincent Palazzolo, marveled at the latest technology that “makes police work easier” and chatted with several officers. “Everybody at the police department treated me like a celebrity,” Kurkowski said.

But perhaps his favorite part of the day came when the veteran officer discovered that a picture of him in full uniform was displayed on the walls of the station.

“Kurkowski’s face lit up when he saw himself in a picture hanging in the hallway at the police station,” the department said on Twitter.