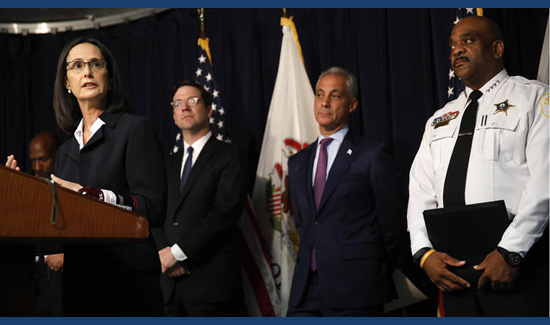 Illinois Attorney General Lisa Madigan on Tuesday sued the city of Chicago, contending Mayor Rahm Emanuel’s reforms are not sufficient to prevent the Chicago Police Department from continuing a pattern of deadly and excessive force that disproportionately hurts African-Americans and Latinos.

Despite the sharp criticism in the lawsuit, Madigan and Emanuel appeared together at a news conference where they called the effort moving forward “a partnership.”

Still, Madigan’s move effectively pushes Emanuel toward acknowledging he will have to accept a federal judge’s oversight of the Police Department, a still-to-be-negotiated agreement that likely will cost the city millions of dollars in reforms and run for several years.

The lawsuit also means Emanuel likely will have to agree to pursue reforms above and beyond what his administration already has put in place, at a time when the city continues to deal with surging homicide and shooting numbers. Complicating that effort are ongoing contract negotiations with the Fraternal Order of Police, which blasted Tuesday’s announcement as “a potential catastrophe for Chicago.”

Figuring out how to fix a department that federal officials concluded has been plagued by misconduct for decades has been a challenge for Emanuel, who has pivoted several times on an issue he’s been wrestling with since a judge ordered him in November 2015 to release the Laquan McDonald police shooting video.

Back then, Madigan called for a federal probe, which Emanuel initially resisted. The resulting federal civil rights investigation was highly critical of the Police Department, and in January, Emanuel signed an agreement with then-President Barack Obama’s Justice Department to seek a consent decree in which a federal judge and court-appointed monitor enforce reforms.