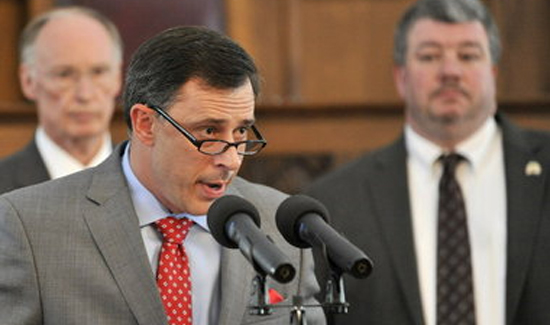 Alabama Attorney General Steve Marshall (above) announced today that his office and federal authorities are investigating current and former employees of the Selma Police Department.

Marshall said the FBI and the Bureau of Alcohol Tobacco and Firearms are taking part in the investigation with the help of Selma Police Chief Spencer Collier, who requested the assistance from the state and the FBI.

Marshall said the joint investigation will include an audit of the evidence room after recent reports of items missing.

“I appreciate the assistance of Chief Collier who has provided complete access to department’s records as we conduct our joint investigation into possible corruption and missing evidence,” Marshall said in the release.

Among the items that may be missing are guns that have been confiscated as evidence in criminal cases.

The Selma Times-Journal has reported that a former evidence technician and two others were arrested in connection with guns stolen from the department’s evidence vault.

Authorities caution that if a consumer is considering a gun purchase and has a concern that it may be one of those related to this matter, that they should contact the ATF Hotline at 1-800-283-4867.