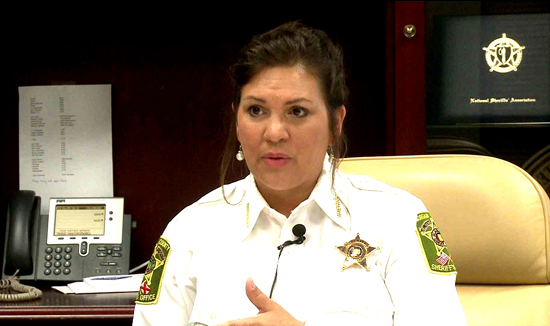 Morgan County Sheriff Ana Franklin (pictured above) said she’s complied with court orders, met her constitutional duty and adequately fed inmates in the local jail. But a civil rights group in Georgia, one long since monitoring that jail, says she should be held in contempt of court for pocketing money meant for inmate meals and using it to finance a crooked car lot.

The case has been tied up in federal court. So what happens next? Does the sheriff face any penalties? Can she keep unspent inmate meal money?

U.S. District Judge Abdul K. Kallan has broad discretion in whether to hold Franklin in contempt for using the jail’s food money to invest $150,000 in a crooked used car lot. Kallon has ordered Franklin to show cause for why she should not be held in contempt at a hearing next week at the federal courthouse in Decatur.

If Judge Kallon holds Franklin in contempt, the Morgan County sheriff could face a variety of punishments, including fines, fees, criminal prosecution or jail time, the Southern Center for Human Rights argues in court records.

For months, Franklin has been embroiled in a legal battle with the Atlanta-based Center because she removed $160,000 from the jail’s food account and loaned $150,000 to a crooked used car lot.

When she withdrew the funds, Franklin violated part of a 2009 consent decree that prohibits the Morgan County Sheriff from spending food money on anything other than inmate meals, Judge Kallon ruled during a previous hearing. Paragraph 22 of the consent decree covers the food account.