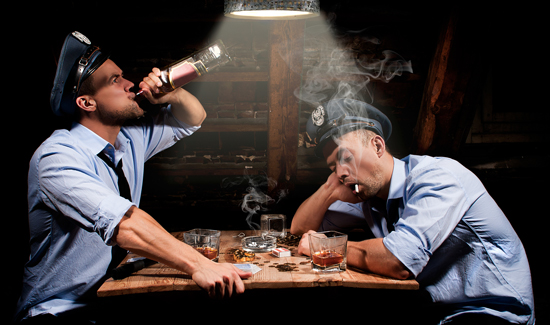 Mention the words “police officer” and many images come to mind. One of the most common is someone strong standing in between innocence and danger. Law enforcement officers face so many risks today. Drug use, robberies, and violent crimes are on the rise. Repeat offenders seem to perpetually revolve through the justice system. In years past, police officers held an esteemed position in society. In today’s heated climate, it seems more and more people are mistakenly singling police out as a problem, instead of part of the solution. So how does an officer handle the stress?

Watch any movie portraying the life of a police officer and you are guaranteed to witness a strong yet broken hero who deals with the pressures of their work with a double, on the rocks at their favorite bar. Maybe it’s a film highlighting the brotherhood law enforcement officers share. Inevitably a scene or two involves everyone from the shift at a neighborhood bar, passing pitchers around in celebration or commiseration.

Law enforcement does have a culture of brotherhood and family. But it can also foster a culture of avoidance and dependency. Many officers are taught and expected to be able to “fix” every problem. They are to shoulder the ugly side of society, yet make it to their kids t-ball game in time with a smile on their face and that can be a difficult transition.

Learning how to deal with the stress of the job and maintaining a functioning personal life is a skill many officers don’t learn. The end result is alcoholism, drug abuse, and/or divorce.

Knowing how to handle emotions is just as important to a law officer’s long-term success as is eating healthy and being aware of their surroundings. But “emotions” is a dirty word in many departments. Officers are drilled on codes, procedures, and handling weapons. But they are not taught how to process the daily drudge and the intense and traumatic experiences they encounter.

Coping mechanisms come in all shapes and sizes. Healthy and unhealthy ones become the everyday practice of LEOs. Alcohol is a depressant and will dull thoughts and feelings, while also causing some to feel even more invincible or simply block out all the emotions they cannot process.

According to an article in Police Chief magazine, the stressors that officers are exposed to “surpass the typical range of emotions” most people experience. The range of cases an officer handles ranges from the mundane to the horrific. In one shift, an officer can witness multiple victims of abuse, motor vehicle crashes involving patients with critical injuries, drug addicts, domestic violence incidents, adrenaline-filled chases. The flux of emotions, along with physiological effects, creates a perfect storm if that officer doesn’t have a healthy way to decompress. Add to the equation a culture that encourages camaraderie over a few drinks and you can end up with an officer on the road to alcoholism.

Police officers have a history of pride and along with each promotion or successful shift brings the desire to gather, share stories, and spend time with people who understand you. Celebrating a promotion or the new recruit classes graduation isn’t a bad thing. What makes it negative is the culture that encourages excessive drinking. The “sleep it off” before your next shift mentality that many departments hold.

A news article out of Dallas tells the story of several LEOs that lost their careers through various drunken acts. The article also highlights how often the drinking that occurs is binge drinking². Most LEOs fall into the Alpha personality and are naturally competitive and peer pressure creates a drive to be “top dog,” not just in the classroom or on the streets, but in the group for a night out. Being in law enforcement is tough; that is an understatement.

Enduring and succeeding in training, being promoted, having a listening ear who truly understands the trials of your day-to-day, are all legitimate reasons to gather with fellow officers. What should not become the norm is that every meeting is clouded by copious amounts of alcohol. Departments need to shed the old-era ideals of the neighborhood bar being the perfect after-shift meeting place. Leaders need to encourage old and young officers alike to seek out healthier alternatives to venting frustrations or celebrating that latest promotion than raising a glass.

One of the most potentially volatile areas of a law enforcement officer’s life is the very part that should be the most stable: family life. But divorce is prevalent among the law enforcement community.

Long and odd hours, rotating schedules, dangerous environments, and unmet expectations all can combine to derail a marriage. Most marriages go through periods of confusion, fights, and disappointments. With a marriage involving a police officer, many spouses complain of their spouse being “married to the job”. Some spouses do okay with this but many do not. Years of missed birthdays, anniversaries, and other family events lead to frustration.

A lack of understanding, even from a loving spouse, can lead to discord in a marriage. And unless you walk in the officer’s shoes, it is almost impossible to relate to or understand the level of stress they operate under. Another issue is that alcoholism is often a “family affair”; multiple family members may have a history of alcohol abuse and the officer may even have grown up with it as the daily norm.

The National Institute on Alcohol Abuse and Alcoholism recommends drinking in moderation and advises those with certain medical conditions and history of family alcoholism should be much more cautious. Now, this doesn’t mean that you are destined to become an alcoholic if your parent was. This just means you may be at a higher risk for developing a drinking problem.

Statistics vary, but one report states as many as 25 percent of law enforcement officers in the US have issues with alcohol. Statistics vary due to many reasons. One of the major reasons is the lack of reporting. Many officers don’t come forward due to fear of repercussions. Fear of losing their jobs, respect, and place in society keep them silent. Coworkers don’t come forward because they will be viewed as ratting out on their partners. So what can be done? Emotional well-being isn’t a term used often in the world of law enforcement. But it needs to start being used as frequently as radio codes, continuing education, and weapons training.

Healthy food choices and participating in an active lifestyle are both extremely important factors that many departments are starting to highlight. But the emotional and mental factors are being ignored. LEOs need to be taught the dangers of not having positive coping methods in place.

Many departments have implemented services where employees can anonymously seek help with addictions and depression. But the stigma needs to be erased that it is a sign of power and strength to be able to “hold” your emotions in. Yes, emotions need to be kept in check while on scene and during an investigation. But afterwards, there must be a positive outlet for the LEO to process. Going home and taking frustrations out on your spouse or children is not the answer.

Going out with your crews and seeing who can down the most pitchers is not the answer either. In order to have a long and successful work life and personal life, LEOs must find a healthy way to deal with their everyday stress. Resources do exist. Workplace anonymous hotlines, faith-based meetings, and community clinics all have something to offer as an alternative to the negatives of using alcohol as a coping mechanism. Seeking help for how to deal with stress is not a sign of weakness; it is a sign of intelligence and acknowledgement.

John Becker has experience as a police officer, clinician, and outreach professional. John also possesses a unique understanding of substance abuse among first responders, having overcome addiction in his own life. He is the Director of First Responder Services, for Sprout Health Group. John is an active member of the Montgomery County (PA) Critical Incident Stress Management (CISM) Team and is certified by the International Critical Incident Stress Foundation (ICISF) for individual and group interventions. John has provided training to a number of agencies and organizations. He can be reached at 215-833-1572 or JohnB@SproutHealthGroup.com.

So in NYS.. if a civilian is charged (not convicted, what happened to innocent until proven guilty? ) with dwi they want said pistol permit holder to turn in permit and guns because getting a dwi makes you less than trustworthy to keep said guns.

Do we see a problem here?