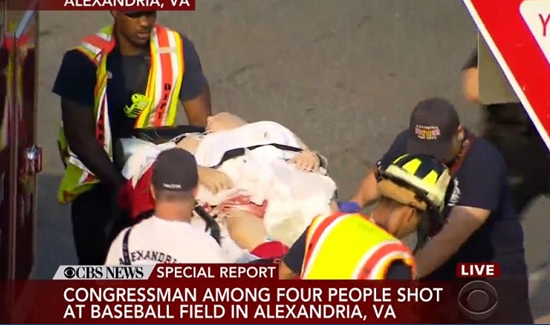 House Majority Whip Steve Scalise of Louisiana was shot Wednesday at a congressional baseball practice in Alexandria, Virginia, officials said. His wounds were not believed to be life-threatening.

Alexandria police said a suspect in the shooting was in custody.

CBS News has learned that Scalise was shot in the hip. At least three others were also shot, including the gunman and two Capitol Police officers.

Rep. Mo Brooks, R-Ala., said several other people also were hit, including two law enforcement officers. Brooks said that Scalise, 51, was down on the ground with what Brooks described as “a hip wound.”

Rep. Mike Bishop, R-Mich., said Scalise was standing on second base when he was shot.

“I was looking right at him,” Bishop told CBS Detroit radio station WWJ. “He was a sitting duck.”

Brooks said the Scalise “crawled into the outfield, leaving a trail of blood.”

“We started giving him the liquids, I put pressure on his wound in his hip,” Brooks said.

In a statement, President Trump said he and Vice President Mike Pence were monitoring developments closely.

“We are deeply saddened by this tragedy,” Mr. Trump said. “Our thoughts and prayers are with the members of Congress, their staffs, Capitol Police, first responders, and all others affected.”

The practice was for a bipartisan baseball game scheduled for Thursday. According to a source, when Democratic members of Congress practicing at a different ballfield miles away heard of the shooting, they immediately stopped and said a prayer together, CBS News senior investigative producer Pat Milton reports.

Scalise is the No. 3 House Republican leader. He was first elected to the House in 2008 after serving in the state legislature.

Rep. Jeff Duncan said in a statement that he was at the practice and “saw the shooter.”

House Speaker Paul Ryan’s office said Scalise’s wounds were not believed to be life-threatening and that a member of the security detail was also shot.