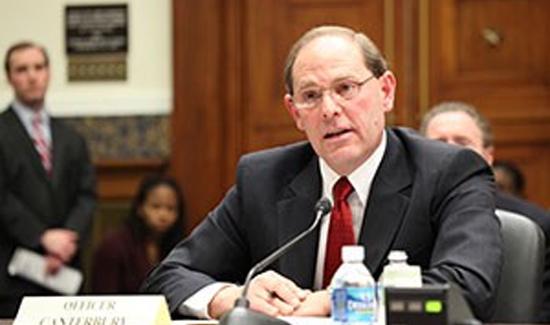 The Fraternal Order of Police, the largest police union in the U.S., gave candidate Donald J. Trump one of his highest-profile endorsements. Now, the group wants to call in its chits with the President-elect, issuing a list of recommended actions for his first 100 days in office.

The organization’s wish list ranges from curtailing police reform and efforts to demilitarize police, to slashing funding for so-called “sanctuary cities.” It even touches on foreign policy, urging Trump to curtail thawing relations with Cuba until it gives up “copkillers,” like Assata Shakur, a black civil rights activist who has been living there as a fugitive after escaping from prison in 1979 where she was serving a life sentence for the murder of a state trooper.

But topping the FOP’s list is the hope that Trump will overturn President Barack Obama’s executive order to limit the Department of Defenses 1033 program, which allowed military surplus equipment, like grenade launchers, blankets and Humvees, to be made available to local law enforcement agencies. Since 1990, the program has handed out approximately $5.6 billion worth of military gear to law enforcement agencies, including 625 MRAPs, mine-resistant armored vehicles from the battlefield in Iraq.

Obama signed an order limiting the program in 2014 in the wake of the unrest in Ferguson, Missouri after a white police officer fatally shot Michael Brown, a black teenager. Images of camo-clad Ferguson police, dressed for war and rolling out armored vehicles in response to protesters made international headlines, sparking a conversation about the creeping militarization of the nation’s law enforcement.

His order also categorized other items, like tactical vehicles, explosives, and riot gear, as “controlled equipment,” meaning that they are still available to law enforcement agencies, they just have to provide a justification for why they might need them.

During the election, the Fraternal Order of Police specifically asked Trump and his Democratic opponent Hillary Clinton to fill out questionnaires declaring their position on the 1033 program and other issues. Trump filled it out; Clinton declined to do so. Trump vowed to reinstate the “excellent” 1033 program in its entirety. Trump, who campaigned on a law-and-order platform, was the first presidential candidate to receive the union’s endorsement since Bill Clinton in 1996.

In addition to restoring the pipeline of military surplus to local police departments, union leaders asked that the president “de-prioritize implementation of some or all of the recommendations made by the President’s Task Force on 21st Century Policing,” which emphasized “community policing” as a means to heal divisions between law enforcement and people of color.

The Fraternal Order of Police also said they support reversing or amending the guidelines barring federal agents from relying on racial profiling during their investigations, which were implemented by President George W. Bush in 2003. Other recommendations include reversing the federal government’s plan to phase out private prisons, and ending Deferred Action for Childhood Arrivals, a program that allows immigrants who arrived as children to petition for permanent status.