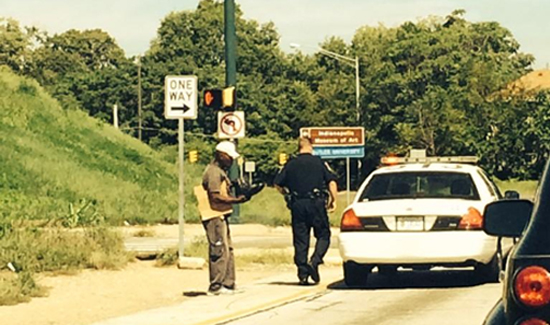 Marginalized persons: Individuals who have been pushed to the margins of society. Example: Homeless individuals – one in five homeless people in the U.S. are veterans.

In the weeks and months since the Michael Brown incident in Ferguson, Missouri, Americans have been fed a steady diet of scary looking tactical police officers and tales of police malfeasance.

As they say, “if it bleeds it leads.”

But perception rarely squares with reality. The largely political debate about “police militarization” has the unfortunate effect of drowning out stories like this one.

A cop with the Indianapolis Metropolitan Police Department stopped at a red light near an exit off I-65 on patrol recently.

That’s where a local homeless guy named Fred can be found everyday panhandling and clearing trash from the roadway.

But instead of writing the homeless man up the cop went a different way. The officer, who wisely wished to remain anonymous, went back to the cruiser’s trunk and grabbed a new pair of boots. He offered them to Fred.

Sadly, they were too small for him to wear. But Fred knew another struggling man in Indianapolis who could make good use of them and planned to share his good fortune, according to local news station WTHR.

It’s the kind of thing big-hearted cops do thousands of times a day. They don’t make a big deal about it and they don’t call reporters to make sure people hear about it.

In this case though the remarkable act of kindness impressed Indiana Pacers center Roy Hibbert as he was driving past the two men as the work boots exchanged hands. The NBA player snapped a photo and shared it via Twitter and Instagram with his fans.

As the old adage goes, courage is doing the right thing when no one’s watching.