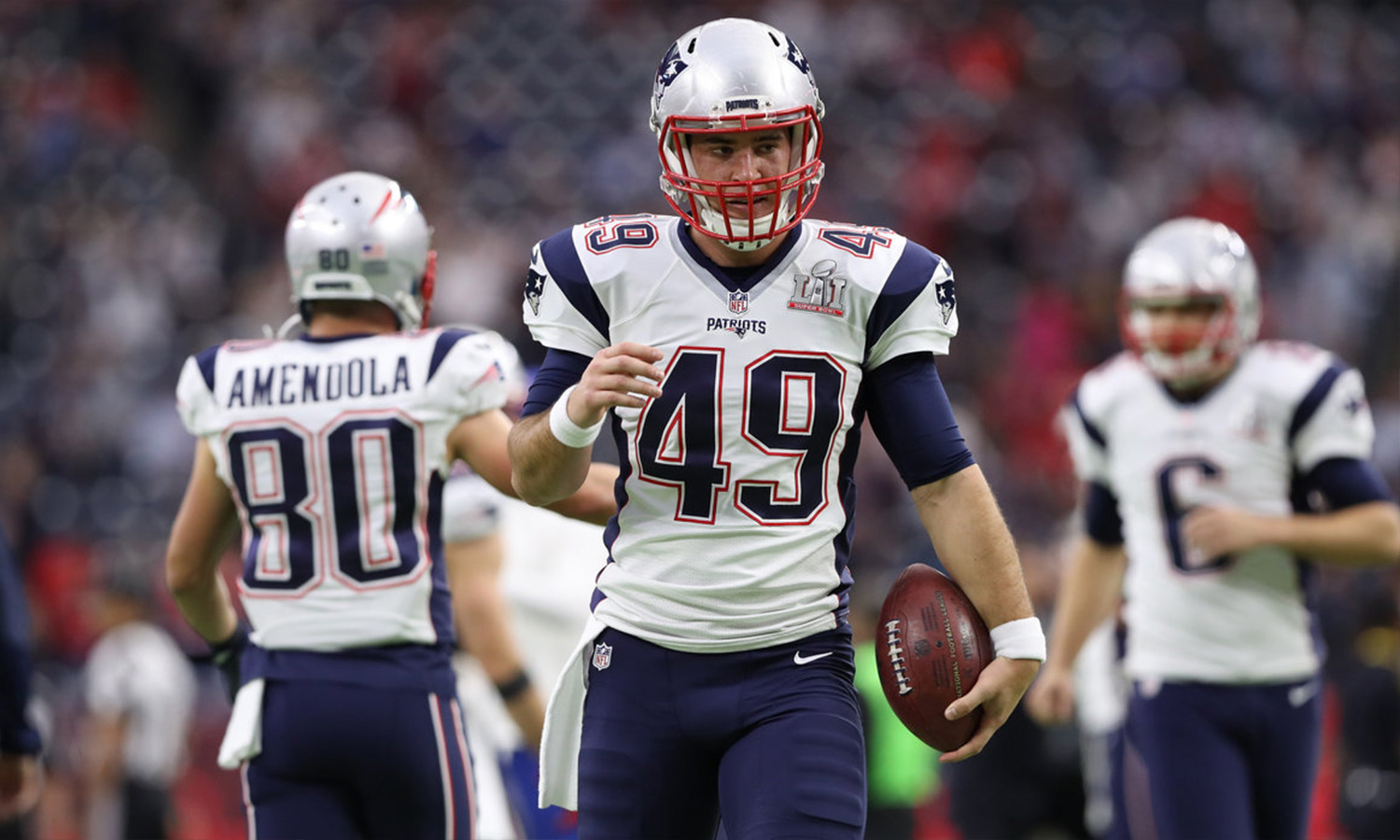 He just can’t stand the phrase universally used to express it.

“Guys come in and all they ever say is, ‘Yes, sir,’ which I hate,” Scarnecchia says.

“That’s kind of a reflective phrase that says, ‘Please don’t yell at me anymore because I’m saying Yes, sir to you,'” Scarnecchia says. “So I tell them, ‘Don’t say Yes, sir.’ Just say, ‘OK, I got it.'”

“Don’t even say that because I hate that worse,” Scarnecchia says. “Just shake your head. It drives me nuts.”

Scarnecchia, the Patriots’ legendary 70-year-old offensive line coach, might have trouble getting his players to break this habit. It’s been ingrained in many of them.

The Patriots have assembled a roster with an unusually high number of players coming from families with parents working in military or law enforcement.

Both of James White’s parents work in law enforcement in South Florida. Trent Brown’s father, Reginald, is a 25-year veteran of the police force in Albany, Ga. Rex Burkhead’s dad, Rick, is an FBI agent in Dallas. Adam Butler’s father retired a Master Sergeant in the Air Force. Elandon Roberts’ father, Eli, served in Iraq and retired as a Master Sergeant. The McCourty twins’ father, Calvin, who died when the boys were young, served in the Army. So did their older brother, Larry White.

Then there’s Keion Crossen’s mother, Winnie, and Deatrich Wise’s mom, Sheila. Both were in the Army.

All told, about one-fifth of the Patriots roster grew up with a military or law enforcement influence.

One former NFL general manager said the number “intuitively seems high” when compared with other teams, but acknowledged he’s never analyzed the topic. Patriots character coach Jack Easterby believes most teams would be lucky to have two or three players from this type of background.

“When I was in college, I wasn’t really around a lot of people that had mom or dad or whatnot in the military,” Roberts said. “Once I got here, I was like, ‘Oh wow.'”

Are the Patriots seeking out these players?

The short answer, according to Patriots director of player personnel Nick Caserio, is no. They’re simply looking for characteristics that will translate to their program, which is famously rigorous and detail-oriented. As former Patriots like to say, New England isn’t for everyone.

The Patriots keep a tight draft board, deeming only about 50-75 players as draftable, Caserio once said. The profiles they develop on each player lists grades for 15-20 traits. Among the traits are intangibles such as “mental toughness,” which after exhaustive research are assigned a numerical value. As part of the research process, scouts dig deep to learn the players’ background stories, discover what influences they had. And then they observe.

Roberts had virtually no interaction with the Patriots before he was drafted in 2016. He doesn’t know if Patriots were aware of his backstory. Wise only met with one staff member of the Patriots, but is convinced the team had a lot of background knowledge before drafting him. Both players were shaped by their upbringings.

There are some benefits of growing up in military or law enforcement households that require little explanation. Attention to detail and preparedness is crucial. Self-control is stressed.

“If someone’s words were getting in my head, I was taught not to fight them, not to hit them,” Butler said. “Calm down, stay disciplined.”

“It was tough love,” Wise said. “I could say that it helped me acclimate to any condition, any coaching style.”

“It’s a sense of ingrained accountability, you’re taught that everything you do has a repercussion,” Cardona said. “… Getting those experiences prepared me for the Navy, but it also prepared me for being on this team.”

Beyond the obvious carryovers, children in military families frequently move around the country, which, according to renowned sports psychologist Bill Cole, can make them “more resilient to change and more adaptable.” That’s a desirable trait for a football player.

And there’s the life perspective the players carry with them throughout their careers.

“If you’re a kid and the parent is in military or law enforcement, and you’re hearing stories from the parent, reality is more real to those people,” said Cole, who has worked with Olympic and professional athletes. “They’re hearing about these real things that happen to people they know, not that they read about in the newspaper.”

Roberts was in middle school when his father was deployed in Iraq. His dad used to call in the mornings before Elandon went to school. Sometimes, they would only be able to communicate via email.

“Just seeing how he handled it, my mindset kind of changed on a lot of things,” Roberts said.

Burkhead’s father supervises a unit of SWAT officers, bomb technicians, and crisis negotiators as part of a critical incident response team that was formed by the FBI in 2013, according to News 8 in Houston. In 2000, while working as an FBI agent, Rick Burkhead was in pursuit during a high-speed chase following a bank robbery, according to a court document. The suspects were firing at officers and innocent motorists.

“It’s stressful at times, wondering if he’s going to come home,” Burkhead said. “What’s going on at work? Why is he having a late night or whatever? It really makes you appreciate all the small moments you have together.”

There’s undoubtedly an accelerated maturity that comes with growing up in such an environment. And longtime running backs coach Ivan Fears went as far to say the players in his group this year, led by Burkhead, White and Sony Michel, are “the best character guys I’ve ever been around.” Teammates all describe Burkhead as selfless.

“You understand being servant-minded if your parents are in the military or a service, any type of service,” Easterby said. “You understand something bigger than yourself, right? I always say this: Bill (Belichick), (Gregg) Popovich, (Mike) Krzyzewski, I look at all three of them — Navy, Air Force, Army. I look at the military backgrounds that they experienced growing up and look what they’ve done with their organizations, putting their teams first and understanding humility and leadership. I think it’s no accident that that happens.”

Similarly, it can’t be a coincidence that Belichick has ended up acquiring so many players who were raised in military and police environments. Belichick’s own coaching philosophies were molded by observing his father, Steve Belichick, and former Navy coach Wayne Hardin.

Belichick doesn’t seem to be searching for a singular personality type; Wise dances in the locker room and cracks jokes with anyone, Burkhead is reserved and actively avoids attention. The McCourtys always are ready to rag on their teammates, or each other. White laughs a lot and is as humble as any Patriots player. There’s a mix of temperaments and energies. That’s necessary on any team. But many Patriots share common background stories, and were raised with similar principles.

So by the time they get to Foxboro, they’re already well prepared.

“We coach them hard and we put a lot of demands on them,” Caserio said. “Especially the offensive linemen, you know how Dante is going to coach them. So is (a player) going to be able to handle that on a daily basis?”