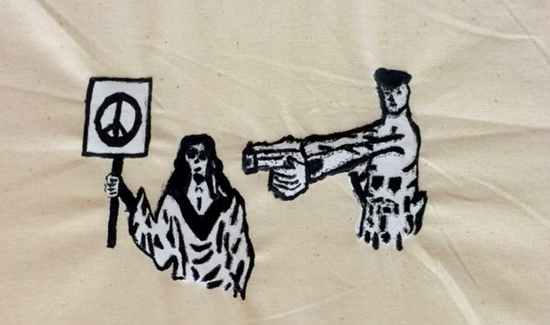 In New Jersey, a controversy has exploded after high school students, teachers, and administrators staged a student art exhibit that has police and police supporters seeing red.

According to New Jersey.com, “Artwork depicting scenes of police brutality displayed in a Westfield High School art show has set off a firestorm of comments from police supporters who have called the images “a gross misrepresentation,” “ignorant,” and “one-sided.”

Laurie Maloney used to be a cop in New Jersey but now lives in Texas.

“It really incensed me that this was so one-sided,” she told NJ Advance Media. “I’m all for the First Amendment, believe me. I’m not defending any police officers who are bad, but you can’t lump 900,000 people that work for law enforcement in the same category. What’s even more frightening is they brought grammar school children through this show. When I was young, we were told the police were good and if you had problem to go to the police. Showing these pictures to kids could cause them to be afraid of police, and I think that’s wrong.”

Others say kids are entitled to their opinion and artistic expressions.

“We submitted several different topics of our choice and finally narrowed them down to three—Law Enforcement – Police Brutality, Modern Technology Advances, and Gender Equality,” said student Kayla McMillan. “The students were allowed to choose either side of the arguments and were told they would not be in trouble for their own opinions.”