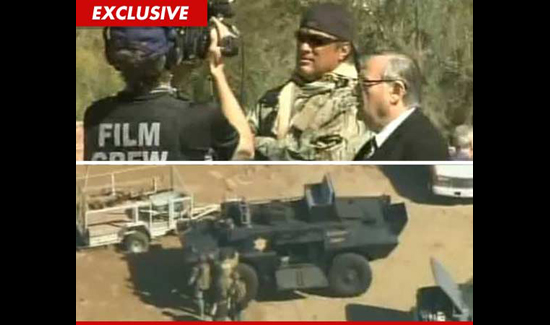 After a national debate of sorts regarding so-called “police militarization,” different agencies are taking different paths. While some police departments and sheriff’s offices are defending the need for things like MRAPs and Bearcats. Other agencies have decided some of the military-grade equipment is not worth the post-Ferguson public relations hassles and trying to return it or give it away.

Officials with the Chelan County Sheriff’s Department in central Washington told Mother Jones magazine reporter Molly Redden that his agency isn’t having much luck finding takers for their tanks.

“We really want to get rid of these,” Undersheriff John Wisemore says. “We’ve been trying to get the military to take them back since 2004.”

The tanks got to the department courtesy of the Dept. of Defense program 1033. All told the military has unloaded $4.3 billion worth of combat equipment to local law enforcement. The problem with the public debate over militarization and public safety is that there’s been very little in the way of context and specifics. For instance, in a large urban area armored personnel carriers are obviously an advantage in extreme situations. Everyone understands that getting a wounded cop out of the line of fire of an active shooter without getting more cops shot is a good thing.

But the amphibious tanks that Chelan County police are trying to unload are a different story.

It’s hard to imagine when a county sheriff’s office would need a tank capable of firing 107-mm mortars—especially in a rural area.

But here’s the thing- Wisemore can’t unload these things and it’s not for a lack of trying.

If you’ve ever been in the military or dealt with military bureaucracy this will sound familiar: Last June, Wisemore got an email from a Defense Department liaison promising to tell him how Chelan County can get rid of the tanks. He’s heard nothing since.

But others have seen the backlash in terms of public opinion regarding the use of some military equipment and decided that a good relationship with the community being protected and served outweighs the value of gear that may or may not be used should the worst of the worst possible scenarios come to pass.

San Jose police spokeswoman Sgt. Heather Randol told local news station KCBS the decision her agency made to get rid of their MRAP was informed by the very real chance of damaging the department’s image and hard-won good will among taxpayers.

The City of Davis also decided to return its armored vehicle after complaints from residents.

But in the end, many law enforcement officials say like a lot of things, the decisions about what gear to acquire and deploy is essentially an exercise in common sense.

According to the Bay State Examiner newspaper, a document from the Massachusetts State Police shows that the West Springfield police had at some point requested two grenade launchers.

West Springfield Police Officer Joseph LaFrance said in a voicemail earlier this year that “grenade launcher” was “kind of a misleading term” for the weapons.

“We have no grenades,” he said. “It’s a multi-use device. We would use it to fire tear gas canisters for crowd control or a riot situation. They also can fire rubber batons at somebody as a less-lethal force use.”

“In my 17 years here, I’ve never seen it deployed. They’ve been in the closet and unused as far as I’m aware,” he added. “They’ve never been used or deployed.”

Some might say that makes defending the fact that the agency even has them that much harder.