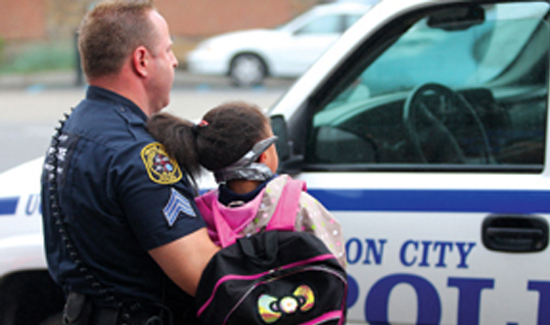 Talking with one of our gym staff about how we train and reward officers, he said, “We develop a mentality of “anything to get the bad guy; constantly on the hunt…, ” that leads to acting recklessly.” Further, that view of the job robs cops of job satisfaction.

Think of your most satisfying day on the job, one that made you feel great to be a cop. In workshops I have asked over 1,000 cops to remember a day like that; 99 percent do not think of an arrest. The satisfying memory has to do with helping someone. What did you recall?

The reason that helping is so satisfying has to do with the following concept from Fulton Sheen. Each of us is two people. The first is “Who I Am”, the person with flaws and secrets that cause shame; I don’t want anyone to know of this person. The other is who I Ought to Be”.

The person I ought to be governs behavior with specific standards, checked daily, rather than feelings.

As the distance increases between Who I Am and Who I Ought to Be,” more tension enters my life. This is painful, unless one is a sociopath. Officers must understand who they ought to be and move closer to that person. Failure to do so causes painful disharmony, as behavior conflicts with core beliefs. You see, just because I can do something under law does not mean I ought to do it.

Why did you become a cop? During Week One in the academy, most say they want to make a difference—help people—but by graduation if you ask what the rookie cops are chompin’ at the bit to do, they say, “Make arrests!” Further, ask how many want to go to specialized units; 70 to 80 percent say they do and they cite making gang, gun, drug, and felony arrests as the means to their goal of “plainclothes.”

They hit the street, and soon hunting is more important than helping. Eighty percent of calls are service calls, often viewed as mundane. In the minds of too many officers, helping becomes an intrusion or B.S. Moreover, what do our organizations recognize and reward?

Tell me I’m wrong. Most police agencies reward hunters and ignore—or worse, ridicule—officers who help people. What does your agency reward and punish? A sergeant I interviewed said, “We reward people for doing the craziest shit ever!” He cited several officers who received awards for reckless behavior that violated department policies. (I suspect some of you can put a name to this.) Officers receiving the awards are held up as brave. Dare I ask; how much of bravery is really recklessness, the risking of one’s life and career because ego cannot be reigned in, and, of course, it is fun, isn’t it?

Sometimes the recklessness is an abuse of power. We do foolish things for the same reason dogs… oh, nevermind. We do dumb stuff because we can. It feels good in the moment, and nobody will stop us. Some peers and bosses ignore and lie for officers who abuse their power. According to Dr. Neal Trautman of the National Institute of Ethics, every major police scandal involves bosses ignoring, and often rewarding, violation of citizens’ rights because aggressive hunters bring in “extraordinary” arrests.

I retired with about fifty department awards, most gained in my young, reckless and stupid days, not one was for helping. Citizens, on the other hand, recognized my service because more than fifty of them wrote letters of commendation that made it to my personnel folder. In discussions with officers many say that helping takes time they don’t have because jobs are waiting. Bosses get on your case for taking too long, particularly if no cars are available. They even say, “That’s bullshit, do some real police work.”

In a child neglect case I had with a six year old and his two-year-old sister for whom he was caring, a watch commander reamed me for taking too long trying to route the children properly. He said, “The kids are already screwed, you aren’t going to make a difference.” I responded, “Do what you want, I am not going to screw them while I have charge.” The next day he told me that I was right. He was under pressure because of manpower shortages. A good man; he needed to be reminded.

Helping, in the form of service and protection, is our purpose; yet it is uncommon. In classes, both inside and outside my department, I have posed this question. How many here have had a family member stopped by the police and that person was treated rudely until they made known they were related to a police officer? Half the class typically raises their hands. The question that follows is; was your family member treated differently once the officer knew they were related to a LEO? The answer is mostly “yes” with an occasional respondent saying, “No, he still persisted in being an asshole.” It seems that some officers see citizens as the powerless THEM and respect is unnecessary, but dealing with one of US, a police family member, respect is due.

Power is at the root of this. Law enforcement has tremendous power that can be handled poorly. Percy Bysshe Shelley said, “Power, like a desolating pestilence, pollutes whatever it touches.” Might abuse of power, displayed as disrespect in everyday contacts, contributed to the problems in Ferguson, New York and Baltimore? If that question angers some, I ask why?

Again, on leaving the academy, too many are more interested in hunting people than helping them. Hunting is terrific, exciting, fun the first few years. Many say, “I can’t believe they’re paying me for doing this shit!” Interestingly, somewhere between years five and ten, the same officers say, “This job SUCKS!” What happened? The job does not change; same circus, different clowns. Tell me this negative view does not bleed into an officer’s family life.

There are laws that govern human behavior that are incontrovertible and as Winston Churchill once said of truth, “…ignorance may attack it, malice may deride it, but in the end, there it is.” One of the incontrovertible laws is, “You cannot help another without helping yourself.”

What is important for us is how we view our purpose. Is focus on helping people, applying the help-others-help-self law? Or is focus on hunting because it is fun, exciting, garners recognition, awards and moves one up the agency’s ladder? When cops view themselves as helpers first, which they ought to, it is likely that arrests will come in abundance; however, in focusing solely on hunting, selfishness is the motivating factor rather than generosity. This is a formula for anger and inner turmoil.

In his book, Achilles in Vietnam, Dr. Jonathan Shay, who specializes in counseling Vietnam veterans with PTSD, says the three main cause of PTSD are:

1. Exposure to trauma,
2. Betrayal by leadership and
3. Dehumanizing people, typically those seen as the enemy.

Law enforcers are certainly exposed to trauma. Ask officers in your agency if they feel betrayed by leadership. The US versus THEM view cited earlier is a characteristic of a hunter only mentality. Isn’t that really a form of dehumanization?

I am not saying officers who say, “This job SUCKS!” suffer from PTSD, however, breaking the “help-others-help-self” law because using power is fun, or because peer and boss acceptance is sought has consequences that take years to manifest as self-disgust. Note that helping does not preclude hunting. Hunting is a necessary part of the job.

Subconsciously, we know the purpose of police is to help people, not hunt them. This causes disharmony; a guilty conscious needs no accuser. In psychology this is cognitive dissonance; behavior in not consistent with what a person knows in their heart is right and just.

“This job SUCKS!” translated is, “I do not like the way I am behaving, but don’t know how, or refuse to change.” We become disgusted with ourselves as we move further away from “who we ought to be.” I think Sheen’s concept of how this is linked to stress is spot on.

Been there, done it; tell me I am wrong.

Thomas Cline—spouse, father, MBA, MAP, with 47 years in law enforcement—is president of the International Association of Ethics Trainers and a writer/trainer at the Chicago Police Academy. He is author of Cop Tales! (Never Spit in a Man’s Face…Unless His Mustache is on Fire) and Surviving Storms. Non-Tactical Career Survival for Law Enforcers. For info on training and workshops, email coptales@gmail.com.