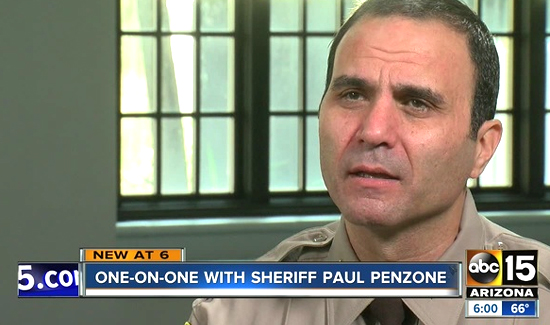 Ed. note: For the uninformed, it must seem like an insurrection. Federal officials and politicians trying to get the cops to do ICE’s job for them without compensation are shocked that local law enforcement professionals remember exactly what happened with 287G the first time around. And since it’s an old idea that was poorly thought out and one that produced almost nothing in the way of promised results, it’s hardly surprising we’re seeing the same pattern play out now.

Penzone told reporters that earlier Friday, his office had been advised by the Maricopa County Attorney’s Office that he faced a “threat of litigation” because of the procedure, which forced the Sheriff’s Office to change its policy.

Individuals no longer will be detained beyond the time that they otherwise should be released for an offense.

“There’s no further authority to detain an individual,” Penzone said. “We are following our legal obligation, to process that individual for release.”

Penzone said he alerted ICE officials to the change Friday, and that the new policy would be effective immediately.

The previous process was known as an ICE detainer.

If ICE finds an individual is in the country illegally, the process can initiate deportation proceedings.

Penzone said an ICE agent will remain in the jails and still will screen everyone who is booked. The changes come on the back end, when the individual is to be released.

Penzone said ICE agents will receive a notification when the individual is to be let out of jail, but the detainee will no longer be held longer than a legal citizen would be kept.

The Maricopa County Sheriff’s Office will not facilitate the transfer to ICE, Penzone said. He could not offer clarification on how ICE agents would collect those the agency deemed fit for deportation.

“ICE will have to take a more aggressive position on how to act on those,” Penzone said.

Police will no longer follow the law because they might get sued in civil court.
That is screwed up on every level.

This is a disgrace! As a police officer, keeping our communities and our country safe is a responsibility. Police Officers on a daily basis risk civil liability, I guess Americans will have to defend and protect themselves if agencies don’t have the fortitude to protect them! Seems to me if someone is flagged for deportation and they are in jail, they have already violated several laws. Is that someone we really want running around to commit more crimes? Why wouldn’t they commit more crimes, they have nothing to lose. It’s kind of like those funny commercials on T.V. about the Security Monitor. Law enforcement in America are becoming monitors. The difference is, that is dangerous, not funny.