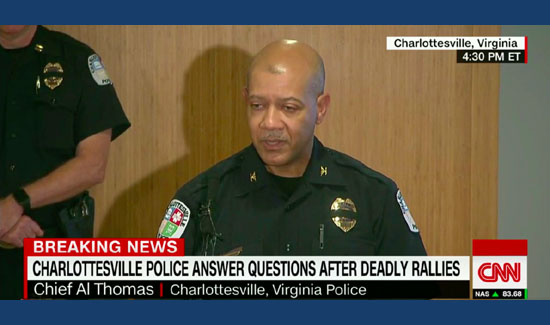 CHARLOTTESVILLE, Va. — As demonstrators clashed near a downtown park here two weeks ago, a white nationalist protester in a bulletproof vest turned, pointed a pistol toward the crowd and fired a single shot at the ground, in the direction of a black man wielding an improvised torch.

To make his escape, a video recording shows, the armed protester strolled past a line of about a dozen state police troopers who were safely positioned about 10 feet away behind two metal barricades. None of them budged.

“We all heard it and ran — I know damn well they heard it,” said Rosia Parker, a community activist in Charlottesville. “They never moved.”

Police had a suspect in the shooting in custody on Saturday morning, according to an official familiar with the investigation, who requested anonymity to provide information not yet public. But residents are still demanding to know why officers did not act in real time as heavily armed people fought and a car sped toward a crowd, killing a woman. So stark was the police failure to intervene, many participants in the protest and counterprotests believe it was by design.

Now, as white-power organizations declare their intentions to rally in cities around the country, police departments are looking to Charlottesville for hints on how to keep the peace — and what mistakes to avoid. Charlottesville, too, is seeking answers. The city announced on Friday that it had hired a former United States attorney to evaluate the planning and response to three white supremacist events in the city this year. The final rally, a show of power by white supremacist groups, was ostensibly held to protest the removal of a statue of Robert E. Lee, the Confederate general.

Officials have insisted that no “stand down” order was issued, and a state police spokeswoman said troopers did not hear the shot. But many people suspect the inaction was deliberate, because just a month earlier, the police were heavily criticized for responding harshly at a Ku Klux Klan rally where anti-Klan protesters were sprayed with tear gas and arrested.

On the day of the “Unite the Right” rally, Aug. 12, only eight arrests were made, even with 125 local officers, hundreds of National Guard troops, the state police and neighboring police agencies present. Those arrested included James A. Fields, the driver who has been charged with murder in the death of Heather D. Heyer.

Investigators are also close to making arrests in the case of DeAndre Harris, 20, a local teacher’s aide and African-American who was beaten with a metal pipe and slabs of wood in a parking garage just a few yards from Police Headquarters, the city manager, Maurice Jones, said.