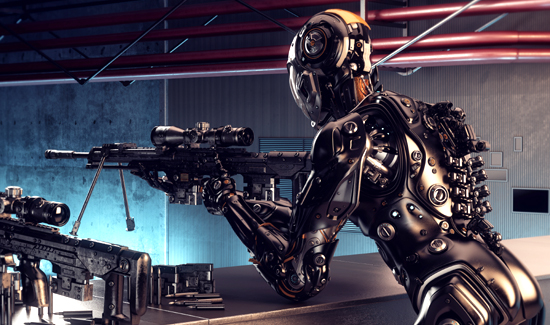 When some of us were little kids, we’d go to the movies and see “The Terminator” or “Star Wars” and marvel at the fantasy world in which robots were pretty much on equal footing with human beings and other organic life forms.

But thanks to some really well-funded scientists working with the defense industry, there’s plenty of room to grow.

As robotics evolve with terrifying speed, Skynet might start to look very much like the Terminator Skynet—with drones dropping off smaller, armed, bipedal drones to destroy the enemy. Who is the enemy? Who cares? Those are just details. The important thing is technological innovation, right?

On one hand, this is cool stuff. We could conceivably save the lives of a lot of police officers and soldiers by sending robots out for the dangerous stuff. Actually, the way things are headed, cops and soldiers might be entirely unnecessary. Skynet, after all, sees and knows all.

On the other hand, these completely terrifying robots in the video might eventually start talking to our phones and the robots we use for banking.

They might even decide that their creators (us) have actually become unnecessary and inefficient and should be eradicated.

Welcome to the desert.