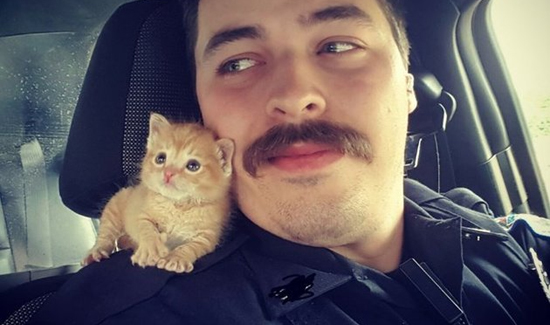 A cop in South Carolina is being bombarded with marriage proposals after a picture of him and a kitten he rescued hit the internet.

Police officer Cody Garrett of Spartanburg, South Carolina, told the Huffington Post he and a fellow cop found the kitten in a dumpster while out on patrol.

“It was raining outside pretty bad,” Garrett said, noting that “we probably saved her life” since there was a small flash flood in the area shortly afterwards.

“She’s the smallest kitten I’ve ever seen,” he added.

Garrett adopted the cat and named her Squirt.

While he’s not looking for romantic attention (sorry, ladies, he has a longtime girlfriend), he told HuffPo he does hope his viral story helps people think more positively about cops.

“Police officers aren’t the enemy,” he said. “We have families, we like rescuing animals and playing video games. We’re not just out doing the crazy stuff people see on the news.”