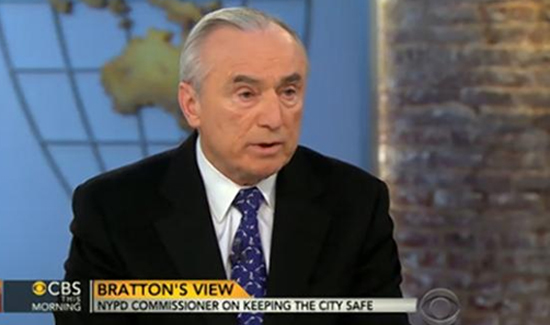 Ed. Note: The following is an op-ed piece written by NYPD Commissioner Bill Bratton. A link to the full piece can be found at the end of this post.

Like the murders of Officers Rafael Ramos and Wenjian Liu back in December, the death of Police Officer Brian Moore, shot in the head this month while stopping a man with a long criminal record, has hit us hard in the New York City Police Department. We lost an exemplary police officer and a beloved young man.

For our cops, it was another bitter reminder that any day—begun in peace and routine—can turn to mayhem, murder and tragedy in an eye blink. Despite the huge crime declines of the past quarter century, some urban neighborhoods are still fraught with danger, still in the grip of violent subcultures that celebrate the blood feud, the revenge killing and the gun.

Few would deny that we need a strong police presence to check this violence.

Yet other recent incidents, particularly the death of a South Carolina man shot in the back while fleeing a police officer, have reinforced another storyline: police misusing their power to employ deadly force. Many people, especially people of color, have concluded that American police are careless to the point of criminality in their use of force toward young black men.

I believe this view to be a gross caricature of our country’s police officers, but I understand how recent incidents have engrained the idea in people’s minds.

My job, and the job of every police leader in this country, is to find some common ground and to help the two sides of this debate see each other more clearly and understand each other more completely.

Police officers must fight against the tendency to see every young black male as a possible perpetrator. Most of them aren’t “perps,” and they strongly resent the imputation that they are.