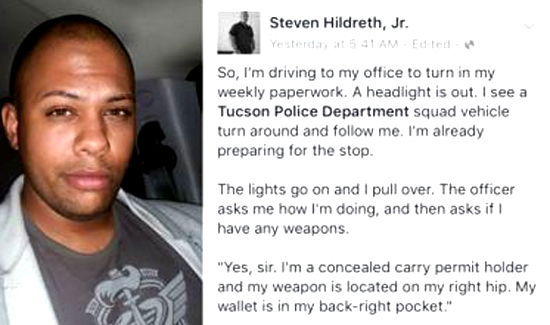 Steven Hildreth Jr. says he was pulled over by the Tucson Police Department for a broken headlight. When the officer asked if he had any weapons, he told him he is a concealed carry permit holder and had a gun on his right hip.

Because his wallet was in his back-right pocket, the officer needed to disarm him to check his ID. Hildreth wrote about his experience with the officer and posted it to his Facebook page.

“So, I’m driving to my office to turn in my weekly paperwork. A headlight is out. I see a Tucson Police Department squad vehicle turn around and follow me. I’m already preparing for the stop.

The lights go on and I pull over. The officer asks me how I’m doing, and then asks if I have any weapons.

“Yes, sir. I’m a concealed carry permit holder and my weapon is located on my right hip. My wallet is in my back-right pocket.”

The officer explains for his safety and mine, he needs to disarm me for the stop. I understand, and I unlock the vehicle. I explain that I’m running a 7TS ALS holster but from the angle, the second officer can’t unholster it. Lead officer asks me to step out, and I do so slowly. Officer relieves me of my Glock and compliments the X300U I’m running on it. He also sees my military ID and I tell him I’m with the National Guard.

Lead officer points out my registration card is out of date but he knows my registration is up to date. He goes back to run my license. I know he’s got me on at least two infractions. I’m thinking of how to pay them.

Officers return with my Glock in an evidence back, locked and cleared. “Because you were cool with us and didn’t give us grief, I’m just going to leave it at a verbal warning. Get that headlight fixed as soon as possible.”

I’m a black man wearing a hoodie and strapped. According to certain social movements, I shouldn’t be alive right now because the police are allegedly out to kill minorities.

Other officers and me have asserted 10,000,000 times before that we do not racially profile or take different actions against minorities because they are minorities. We protect and serve our community and we do act and react when provoked by the subject we stop, be he or she is White, Black, Hispanic, Asian. Normally better than 8 of 10 stops are no problem and the subject is back on the road or headed home after the encounter with no negative affects. Yet, we have the 1 or 2 especially when with another subject in the vehicle that wants to argue, get aggressive, or refuse to obey our instructions. You can only give so many chances before you have to react and end the situation. This is usually where there is resistance, outright fight, or attempt to injure the officer. They normally don’t account for more than 10% for the time we enforce the law. Yet the Media has gone to war against us and they have magnified every incident to make it seem like an everyday occurrence and a blatant war on minorities. This is unfortunate and it is effecting the way most officers police at this time. It will effect recruiting in the future and may cause an acute shortage of police officers in the future. all of this is not good for America and not good for communities with high crime rates. So wake up America you are attacking the one institution that is willing to give their lives to protect you. All lives matter! We protect and Serve, give us the decency of your respect and cooperation.

I wish I could agree with you but statistics prove otherwise, police regularly racially profile. It doesn’t matter, traffic, drugs, walking, etc. If you are a minority, the likelihood is that you will be stopped by police is greater than others and that fact cant be denied, no matter how many times LE deny it. Having said that, the reason there was no problem with this man’s experience had everything to do with his conduct. He was armed and he had to make the officer feel comfortable, otherwise things could’ve been bad for all parties involved; especially in today’s environment. Even though, I’ve never had a bad experience with LE, it’s only because I know how to interact with them that keeps me and the officer safe. My hands are always visible, inform the officer ahead of time of every movement I’m about to make and most importantly, I video record every interaction. Only in this country is the citizen expected to do everything right in order to avoid poor behavior on the part of police.