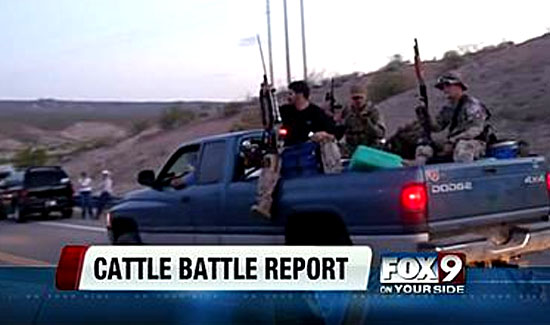 So-called patriots, sovereign citizens, and three-percenters flocked to Clark County, Nevada, to help Bundy fight off federal law enforcement officials, who were after him for illegally grazing his cattle on federal land.

When it was all over, two Las Vegas police officers were gunned down in cold blood by two of Bundy’s supporters.

Emboldened by mainstream political support, the Bundy supporters are now planning to take on the Bureau of Land Management and other federal agencies in Oregon.

Federal authorities have notified the owners of a mining company that they were out of compliance with BLM regulations and ordered them and their equipment off the land by April 25.

The owners of the Sugar Pine Mining Claim then reached out to the Oath Keepers of Josephine County for help, and the pro-gun group issued a nationwide call for assistance that was picked up by websites such as Infowars and Before It’s News.

“If you are a true Militia, true III%, Oathkeeper, etc. then you are needed. If you can get away from home to help, NOW IS THE TIME,” says the alert issued by Chris Langer, a firearms instructor and barbecue restaurant owner from Wisconsin. “Just like Bundy ranch, the BLM is out of order! SHUT DOWN THE FOREIGN CORPORATION NOW! The miners need you!”

Will the “hands-off” approach seen in Nevada lead to the deaths of more cops at the hands of anti-government extremists?

Only time will tell.

Dismayed that Posting is Censored,
LEGAL Protesting is FREEDOM. Crimes committed by certain Individuals Should be Prosecuted But NOT Paint Everyone with a Broad Brush of anti freedom and exercising Constitutional Rights.