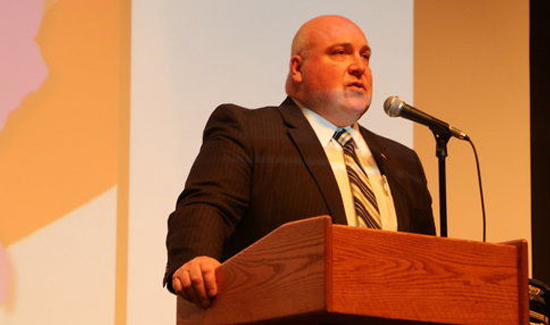 State officials on Tuesday unveiled a $4 million plan to equip New Jersey State Troopers and thousands of local police officers with body cameras as the demand for the technology rises in the aftermath of several shootings nationwide involving police.

However, not everyone is 100 percent happy about it—including Chris Burgos, the president of the State Troopers Fraternal Association of New Jersey.

Here’s what Burgos had to say about the big-time spending initiative, in full:

The association representing New Jersey State troopers was never asked for input on this body cam matter. It was conceived behind closed doors, and don’t get us wrong, we knew body cams were coming, but once again we were left out of the process purposely, and had to go to court again to attempt to get some clarity as to what was coming.

We view this as a negotiable issue that affects terms and conditions of employment for our trooper members. All of a sudden millions of dollars are available for this initiative, meanwhile, we are 500 troopers below adequate staffing statewide. We have had to file many complaints over the past several years against the state for not purchasing new hand guns in a timely manner, as the old ones wore out and malfunctioned often.

Our transportation needs have been neglected as well due to budget balancing tricks called “sweeping the accounts” where every fiscal year buying power is taken away from us to get new patrol vehicles.

Meanwhile we have cars with over 200,000 miles on patrol and emergent repairs often go between $5000 -$7500 per car to keep them running. The funding gimmicks for body cams are troubling, as data storage, band width and administrative costs will be significant for the long term. Here at the New Jersey State Police we have to keep all recordings on file forever.

We foresee more funding battles down the road for our basic law enforcement mission and daily law enforcement needs statewide. Whenever new initiatives are created without dedicated funding, other areas usually suffer.

We will continue doing our duty professionally and without fail, as we were the first agency in the state to have dash cams in all our patrol vehicles over a decade and a half ago, while other agencies shockingly still have none today. What I see here as of now is a policy that has more to do with “gotcha’s” than truly having the best tools to serve the public. We would want to have a dialog with the state as this goes forward to implementation, and we will also be in the courts as well, to make sure we, as a major stakeholder, have a seat at the table.

The state Attorney General’s Office also released a 24-page directive for the use of the devices that was criticized by the state chapter of the ACLU and the president of the State Troopers organization.

The rules emphasize a dozen circumstances in which officers are obligated to record their interactions, including frisks, searches, brief detentions, assisting motorists, making arrests, transporting people under arrest and responding to calls.

Local agencies can add activities that require the use of cameras, and the directive makes exceptions for encounters in schools, healthcare facilities, and places of worship.