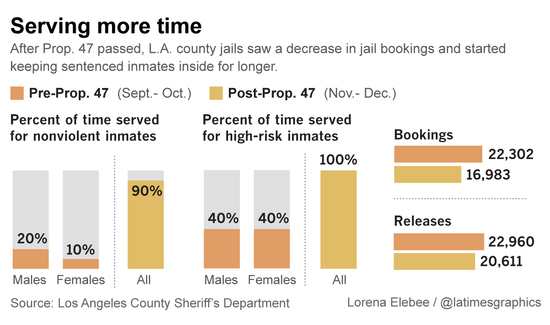 If you don’t work in law enforcement or live in California, you’re probably not familiar with Prop 47, a ballot initiative passed by California voters designed to reduce the state’s prison population and re-classify some non-violent crimes.

But it’s not just California law-enforcement figures that are sounding the alarm on the Prop 47 crime-spike connection.

Police in Las Vegas say Prop 47 is the reason they, like many other large U.S. cities, are seeing a spike in homicides.

It’s a little bit like the “war on cops,” where people’s feelings don’t necessarily line up with real numbers.

A retired FBI agent says the numbers aren’t as important as the impression they give.

“The Vegas cops are the ones who are out there every night dealing with these people in the streets,” Chacon said. “They know where these people are coming from because they are actually talking to them face-to-face, even the ones they don’t arrest.

“If the street cops are saying they have seen an increase in contacts or arrests from Californians let out under the prop, it is pretty hard to argue that isn’t a cause,” he said.

Tying the “prop” to spikes in homicide rates—not just in Las Vegas but in cities all over the country—will be a challenge, in terms of producing evidence as it relates to cause and effect.