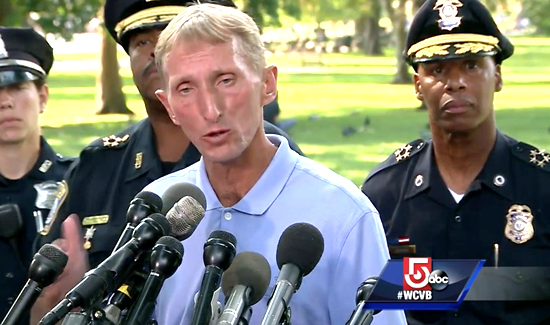 Boston Police Commissioner William Evans said on Saturday that the vast majority of people who came out to protest a conservative free speech rally were there “for the right reason.”

“Ninety-nine point nine percent of the people here were here for the right reason, and that’s to fight bigotry and hate for the most part here today,” Evans said.

Thousands of counterdemonstrators turned out Saturday to protest an event billed as a “Free Speech Rally.” The demonstrations came a week after violence erupted in Charlottesville, Va., as white nationalist and neo-Nazi groups gathered in the usually quiet college town.

The group that organized the rally in Boston, the Free Speech Coalition, had until recently planned to include speakers with ties to white nationalism. But as tensions escalated in the wake of the Charlottesville demonstrations the group has publicly distanced itself from hate groups.

Still, the noon event drew scores of counter-protesters, who voiced concern that the free speech rally would give a platform to racist groups.

“We knew were going to have some people who were going to cause problems and we had to make, the latest is 27 arrests so far today. Most of them disorderly, a couple assault and batteries on police officers and other charges, but I overall I thought we got the first amendment people in, we got them out. No one got hurt, no one got killed,” Evans said, adding there was no significant property damage to the city.

Boston Mayor Marty Walsh (D) also praised the largely peaceful protests and noted that officers worked to ensure no one was hurt during the event.