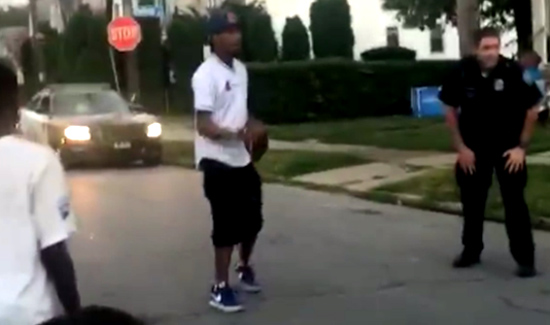 A Buffalo Police Officer’s decision to join into a street football game rather than breaking it up is being held up as a shining example of community policing, and videos of the game are going viral in Western New York.

Officer Patrick McDonald was responding to a noise nuisance call of children playing football in the street, according to The Buffalo News. In a video showing him arrive at the scene, he walks out of his car and says “Where we lining up?”

After making a great catch in another video, he asks, “Do you guys want me to file a police report, because you just got robbed?” before driving off in his police cruiser.

The videos have been shared over 1,000 times, and even reached the attention of Buffalo Mayor Byron Brown, who called it “Community Policing at its best” in a Facebook post.

“I applaud Officer Patrick McDonald for turning a nuisance call into a positive experience for the community,” Brown wrote. “I am proud that he is on the force & thank him for setting an example of why we truly are The City of Good Neighbors.”

McDonald told WGRZ-TV that he didn’t do it for the attention, he just wanted to have a little fun and bond with the people he works every day to protect.

“It helps break down the barrier, this ‘us versus them’ barrier,” McDonald said. “And, at the same time, it shows that police officers empathize with the general public, and that we have a lot of common interests, like playing football.”

The quarterback in the video, Tremail Woolford, shared the videos as well with the hashtag #NotAllCopsAreBadIGuess. He said he never had a bad perception of police, but he saw the video changing a lot of local residents’ perspectives.

McDonald will be awarded Erie County Citizen of the Month this week, according to WGRZ.