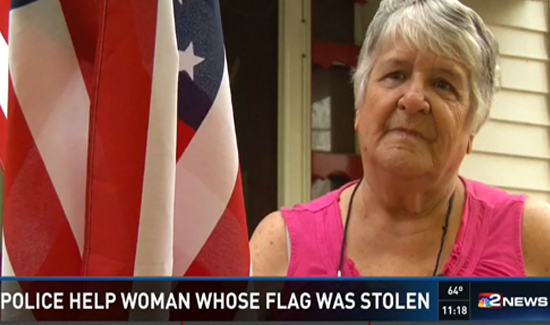 Memorial Day is a holiday about honoring traditions, some incredibly personal. For Marcia Lahr and her husband, Jim, it included proudly flying their flag on their front porch, but this year Marcia found herself having to adjust to some new realities.

“My husband had just passed away during Easter week,” Marcia said. “He was a veteran of the Korean War and we’ve always had a flag. We had a very special flag. They said it had flown over the White House. And it was a very large flag. We were very proud of it.”

Then, Marcia noticed something was missing.

“Our flag was gone. For some reason, somebody stole it, on Memorial Day, from a veteran’s home,” she lamented.

So she took the next obvious step and called the Buffalo Police. “I did report it to the Police, and they were kind enough to take a report,” she said, but then the police officers did something she did not expect.

“A couple hours later, the two officers came back, the same two that took the story from me, and they put up a flag.”