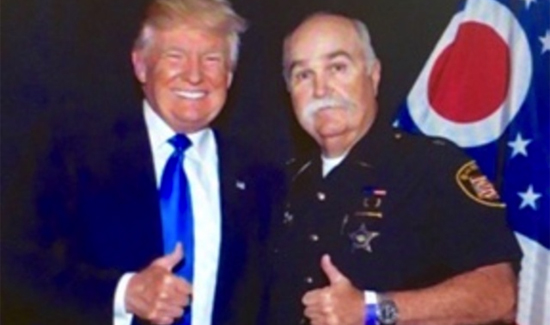 “To the companies that hire illegals and violate the law we r coming (sic).”

This is part of one of the tweets Butler County, Ohio, Sheriff Richard Jones (pictured above with PEOTUS Donald Trump) posted Thursday night, referring to his plans to crack down on local companies and businesses that hire undocumented immigrants.

This has become the norm. First of the year will all change. To the companies that hire illegals and violate the law we r coming.

Anyone who knows or works at places that hire illegals. Please send these places 2 me.

“PC, political correctness, has gone amuck, and people aren’t afraid to stand up anymore,” Jones said. “They want our elected officials to fix this immigration issue. I want it fixed.”

A Trump supporter, Jones has introduced the President-elect at some of his Cincinnati rallies. A Nov. 15 New York Times Magazine article profiling Jones said he casts himself as a “crusader against undocumented immigrants.”

Trump’s stance on immigration has been clear since his bid for the presidency, and he reiterated plans to build a wall along the U.S.-Mexican border during his Dec. 1 stop in Cincinnati as part of his “Thank You” tour.

“We will construct a great wall,” Trump said at the Dec. 1 rally.

(Ed. note: Like the “lock her up,” and “drain the swamp” stuff, Trump now appears to be indicating that was all just nonsense he told supporters on the campaign trail.)

And Jones seems to echo the same sentiments.