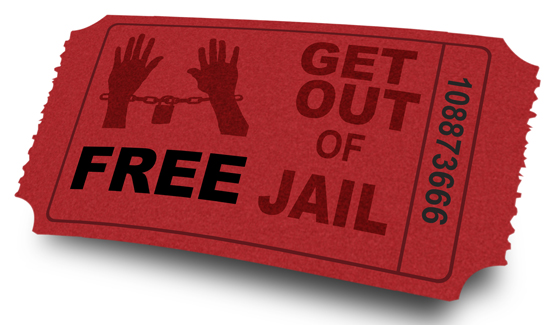 Governor Brown’s charade is over! His own spokesperson admitted that his initiative will allow early release of violent prison inmates.

Well respected Sacramento columnist Dan Walters, following up on the excellent analysis by California District Attorney Association, got the governor’s spokesperson to admit the truth. The spokesperson “confirmed the association’s interpretation is correct.”

This means inmates serving sentences for a laundry list of what Walters correctly labeled “despicably violent crimes” would qualify for early release from their imposed sentences. The crimes listed by Walters included assault with a deadly weapon, soliciting murder, intimidating or harming a crime victim or witness, resisting arrest that injures a police officer, violent elder or child abuse, arson with injury, and human trafficking.

Just the week before Governor Brown was s parceling out misleading soundbites in a never ending stream as he attempts to “mainstream” his initiative reducing prison sentences for all inmates. In pitching his proposal last week to more than 1,000 business professionals and Capitol insiders, he touted his initiative as an injection of flexibility into a rigid sentencing. In fact, what the initiative does is transfer flexibility that does exist in the criminal justice system from judges—who impose a sentence after hearing from the prosecutor, defendant, and victims-to an unaccountable parole board who can reduce prison sentences based on whatever whim a parole commissioner decides to follow. And no one, not even the state legislature, would have the power to overrule their policy decisions.

The truth, as exposed by CDAA, and now Walters, is that, prisoners would be eligible for parole after serving just a fraction of their primary offense – regardless of any enhancements for the harm and damage caused by their crime. Enhancements for a prior offense such as rape, torture, and murder-also known as strikes-could be ignored by a parole board. A criminal could have three, four, even 10 strikes and still be eligible for a parole hearing after on serving a few years in prison.

The key factor in this full-fledged assault on public safety is placing the ultimate authority for a sentence-one which not even a Court of Appeal could change-with a 12-person parole board. These unelected bureaucrats would decide, without input from victims or prosecutors and without regard to the facts of the crime, whether the sentence imposed by a judge after hearing from all parties could be drastically shortened.

George Hofstetter, President of the Association of Los Angeles Deputy Sheriffs, may have said it best, “The governor longs for a return to the ‘bad old days’ of his first term that began in 1974 when parole boards freed inmates who had served extremely short sentences.”