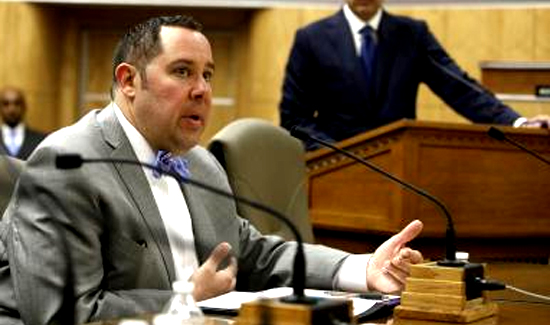 It would be more difficult for police departments in California to discipline officers accused of lying under under a plan proposed by a Los Angeles lawmaker.

Democratic Assemblyman Miguel Santiago of Los Angeles believes current rules allow law enforcement agencies to unfairly target cops who simply make mistakes. His bill, which cleared its first committee hurdle on Tuesday, would raise the standard of proof in cases where officers were accused of lying.

“The consequence of a false and misleading statement has huge implications on prosecutions and a police officer’s career,” Santiago said.

But the measure is receiving pushback from both civil liberties groups and those representing police chiefs and sheriffs across the state. They believe that it’s already too difficult to discipline officers.

“Law enforcement agencies get called out: ‘Why don’t you deal with problem officers? Why don’t you deal with this mistrust that exists in our communities?’ ” Salzillo said at the hearing Tuesday. “And then these bills keep coming and make it harder for us to deal with officers who do violate standards or violate polices or break the law.”

Currently, the Los Angeles Police Department and others across the state can find that an officer made a false or misleading statement if it’s determined that it’s more likely than not that the officer did it. This is the same burden of proof used in most civil lawsuits.

Santiago’s bill would substantially raise the standard in cases of alleged lying. Instead of a greater than 50% chance it happened, the new requirements would mean that the evidence had to be unequivocal. This higher standard, known as clear and convincing evidence, is now used in civil liberties cases, such as restraining orders and the loss of parental rights.

Officer discipline remains a hot-button topic in the aftermath of disputed police shootings and in cases alleging excessive uses of force, incidents that are increasingly captured on body cameras and other video.

Next month, Los Angeles city voters will decide whether to fundamentally change how officer discipline cases are decided. Right now, hearings are conducted before a panel of two high-ranking officers and one civilian. Measure C on the May 16 ballot would allow cases to go before all-civilian panels and is backed by Mayor Eric Garcetti and the Los Angeles Police Protective League, which represents more than 9,990 officers. They argue the plan would allow more community oversight of law enforcement. But civil liberties groups have maintained that the measure wouldn’t make the disciplinary process more transparent or accountable to public concerns.

California has some of the strictest laws in the country preventing public disclosure of police discipline cases. Few details of incidents are allowed to be released — at times, even to other law enforcement agencies.

The union representing sheriff’s deputies in Los Angeles County has sued Sheriff Jim McDonnell over his plan to send the names of roughly 300 officers found to have committed misconduct — including those who were found to have lied — to county prosecutors.

“He said – She said” is no way to prosecute someone for “lying”.
Civil suits need drastically scaled back anyway in favor of criminal suits. Civil suits just means those with the most lawyers win.