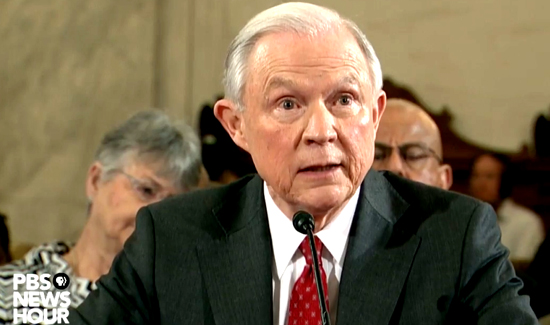 Ed. note: One of the more ironic things about the current Attorney General Jeff Sessions’ threats to withhold federal funds from cities and counties that won’t do the feds’ job for them (for free) is that cuts to grants that help local law enforcement have radically reduced the size of the club the AG is waving around. In addition, cities like Los Angeles don’t have to rely on federal funds to function properly, and many officials understand that savings from the monies paid out in the inevitable lawsuits after raids gone wrong will dwarf whatever was lost, in terms of federal funding.

State and local leaders in California struck a defiant tone Monday, saying they would continue to protect people in the country illegally despite an announcement by U.S. Atty. Gen. Jeff Sessions that the U.S. Department of Justice would soon cut federal grants from so-called sanctuary cities.

During an appearance in the White House briefing room, Sessions repeated previous statements from the Trump administration decrying the danger of sanctuary cities, which limit cooperation between local and federal authorities on immigration enforcement. He did not offer new policies, and Justice Department officials said any new measures would be “weeks or months” in the future.

But in Sacramento the swiftest reaction came from state Senate President Pro Tem Kevin de León (D-Los Angeles), who is championing legislation that would effectively make California a sanctuary state by prohibiting state and local police from enforcing federal immigration laws. He called Sessions’ statements “nothing short of blackmail.”

“Instead of making us safer, the Trump administration is spreading fear and promoting race-based scapegoating,” De León said in a statement. “Their gun-to-the-head method to force resistant cities and counties to participate in Trump’s inhumane and counterproductive mass-deportation is unconstitutional and will fail.”

Through an executive order in January, President Trump first put cities and counties on notice that they would lose federal funding if they didn’t cooperate with immigration agents. The move has broad implications for California, a state that aggressively protects its immigrant population from deportation.

Sessions reiterated old policy during his appearance Monday. The administration of former President Obama issued instructions last July that required any cities applying for Justice Department grant programs to comply with a federal immigration law that requires local, state and federal agencies respond to requests from the U.S. Immigration and Customs Enforcement agency.

Although many municipalities have policies that could qualify them as “sanctuary cities,” those policies do not necessarily mean they are violating the law.