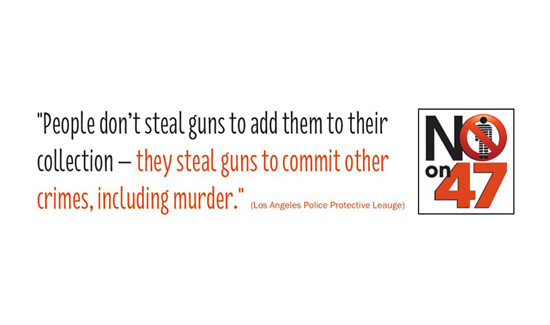 Law enforcement officers in California need your help to defeat Prop 47. If the voters approve the measure, penalties for serious crimes will be reduced and public will be at risk. Read this editorial from the Sacramento Bee to see the urgency and check out this website – Californians against Prop 47.

Do whatever you can to help defeat the measure – write an op-ed piece, send money, write a letter, send an email, make a call. Every little bit will help. And remember, what happens in California rapidly moves east.

Now, while law enforcement officials still are adjusting to the new order, voters are being called upon to decide Proposition 47, an initiative on the Nov. 4 ballot that would reduce penalties for people who commit certain nonviolent crimes and drug offenses including heroin, methamphetamine and cocaine possession.

We urge a “no” vote, in part because police and prosecutors are grappling with the landmark 2011 criminal justice realignment law that shifted responsibility for handling lower-level offenders to the counties.

Additionally, voters approved a 2012 initiative reducing sentences for individuals who previously would have been sent to prison for decades under the 1994 “three-strikes” initiative.

The Sacramento Bee’s editorial board supported those changes. We also have called for reductions in the state prison population. But while the number of inmates has started to tick up to 120,000, it remains far below the 165,000 it was in 2006.

The Legislative Analyst’s Office, an impartial arbiter of ballot measures, notes that 220,000 people are convicted of felonies each year in California. If voters approve Proposition 47, about 40,000 offenders a year would be affected, facing misdemeanors rather than felonies, the analyst estimates.

Those 40,000 criminals either would serve time in county jails or spend no significant time behind bars. Additionally, Proposition 47 would result in the resentencing and potential release of as many as 9,000 inmates now in state prison.

The analyst says Proposition 47 could save hundreds of millions of dollars that otherwise would be spent incarcerating criminals. But the analyst also says “the fiscal effects of the measure … are subject to significant uncertainty.”

As it is, people who are convicted of minor crimes such as shoplifting or drug possession don’t go to state prison, unless they have records that include convictions for serious or violent crimes.

Proposition 47 would change that. Under Proposition 47, people who commit petty crimes would be sent to prison if they have records of homicide or sex crimes, but not for many other serious crimes such as armed robbery, carjacking, residential burglary, or assault with a deadly weapon.

The change is unnecessary. Prosecutors already have the discretion to charges repeat felons with felonies or misdemeanors for minor crimes.

Opponents, who have raised little money, include organizations that represent district attorneys, police chiefs and sheriffs. They make a compelling case that this proposal could hurt public safety in cities that are struggling with gun violence, especially the state’s poorest neighborhoods.

They say that among its flaws, the initiative would redefine grand theft so that “theft of a firearm could only be considered a felony if the value of the gun is greater than $950.” Gascón, the initiative’s main proponent, disputes that claim, noting there are multiple ways to charge people in possession of concealed weapons with felonies.

Critics might be exaggerating their claims. It is, after all, a campaign.

But if they are right, and the measure is flawed, Proposition 47 would be hard to fix. Legislators could alter its provisions only if they were reducing penalties, and then only by a two-thirds vote.

We don’t doubt that some people in prison could live peaceably on the outside, and that some sentences are too long. The Bee’s editorial board long has urged a thoughtful review of sentences.

But that work ought to be done by a sentencing commission established by the governor and legislators. With few exceptions, the blunt instrument that is the initiative process should not be used to alter the criminal justice system.