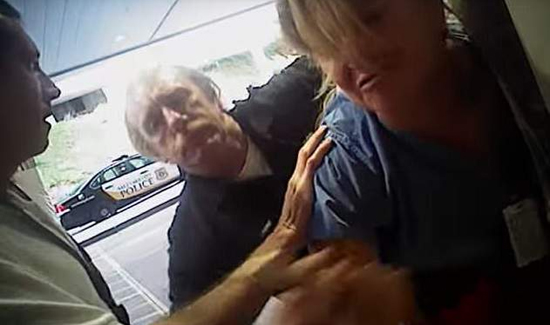 The Salt Lake City hospital where a police officer roughly arrested a nurse who was protecting her patient’s rights in July will no longer allow law enforcement agents inside its patient care areas. They’ll now have to check in rather than enter through the emergency room.

“Law enforcement who come to the hospital for any reason involving patients will be required to check in to the front desk of the hospital,” said chief nursing officer Margaret Pearce of the University of Utah Hospital. “There, a hospital house supervisor will meet the officers to work through each request.”

Hospital officials say they created the policy one day after the July incident in which nurse Alex Wubbels refused to allow a police investigator identified as Jeff Payne to get a blood sample from a patient who was injured in a deadly collision with another driver. Wubbels was following the hospital’s policy (and a recent Supreme Court decision) that requires either a warrant, the patient’s consent or the patient being under arrest for such a sample to be obtained legally.

Last year, the Supreme Court ruled that the Fourth Amendment bars blood tests from being obtained without a warrant in drunken-driving cases.

“Our hospital continues to offer our full support to Alex,” said Gordon Crabtree, the hospital system’s CEO. “I think many of you know she is an Olympian, and to us she’s truly an Olympic-size hero. We extend our appreciation for her dedication and service.”

While Wubbels’ superiors said she had shown professional integrity and grace under fire, the officer’s bosses and Salt Lake City’s mayor have issued apologies for his behavior. He is on administrative leave while the case is being investigated.