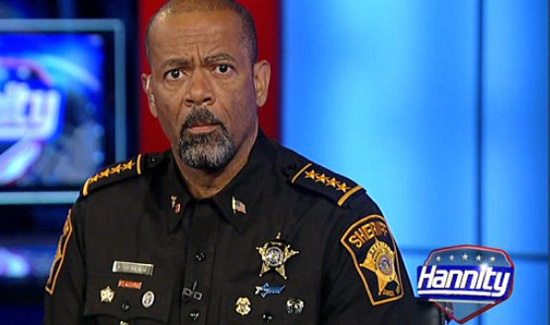 Former Milwaukee County Sheriff and current right wing activist David Clarke produces one of two reactions- usually it’s negative but the folks that like him really, really like him.

“It’s disappointing that any New Mexico organization would invite someone with such a radical disregard for civil rights and human dignity to be a keynote speaker. This invitation sends the wrong message at the wrong time, as we bring back community policing and make progress toward restoring public trust in law enforcement,” said Gil Gallegos, spokesperson for the Albuquerque PD in a statement. Mr. Clarke has been described as looking like the “world’s most overbearing Applebee’s manager,” due to his penchant for sporting so many military style medals.

The task force explained it’s decision to invite a county jailer to speak at the gang conference.

“Each year we look for speakers who can provide a unique experience that officers can utilize in the training. … Ex-Sheriff Clarke served the people of Milwaukee County for 15 years and politics aside, his experiences are invaluable to law enforcement everywhere. … The decision to invite former Sheriff Clarke was made by the [task force] training committee, a committee of 10 volunteers. We stand by our decision to have him as our keynote speaker.”