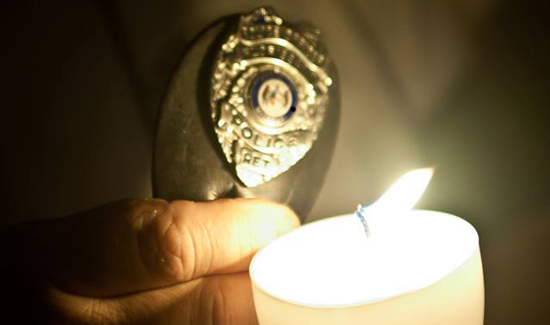 Investigators combed neighborhoods north of Chicago this afternoon in a massive manhunt for suspects accused of shooting dead a police officer. Three suspects are wanted in connection with the slaying. By mid-afternoon, one suspect was in custody, Illinois State Police Sgt. Matt Boerwinkle said.

The shooting happened about 10 minutes before 8 a.m., after the officer sent word over his radio that he was pursuing three suspects on foot, Lake County Sheriff’s Sgt. Christopher Covelli said.

The slain officer worked for Fox Lake Police, a community of about 60,000 people in Lake County, about 60 miles north of Chicago. Reports indicate he was a 32-year-veteran of the agency with four children. The hunt for the suspects — described as two white men and one black man — put at least four schools on lockdown and left people barricaded in their homes in Lake County, Illinois. Residents have been asked to remain inside their homes and businesses, officials said

One police association was fast to respond calling on the White House to break its silence on the alarming number of murders of police officers.

“Today another officer was murdered in cold-blood leaving the law enforcement community astounded at the lack of concern from the White House,” noted John Rivera, the president of the Dade County PBA and the Florida PBA. “For too long President Obama and the White House have remained silent on the killing of our nation’s law enforcement officers.  The silence from our President and White House officials has served to promote the anti-law enforcement climate which had lead to the recent slaughters.

“The President has done nothing to condemn these attacks or discourage future attacks against law enforcement officers. It is not open season on law enforcement and it is time this Nation’s leader took a strong stance against this violence. Without the brave men and women who pin on a badge our Nation is not safe and the pillars of justice weakened,” Rivera continued.

Stand up and support our law enforcement.we all need their help at times.they pin that badge on to keep you and your family safe and put their own lives at risk for you.