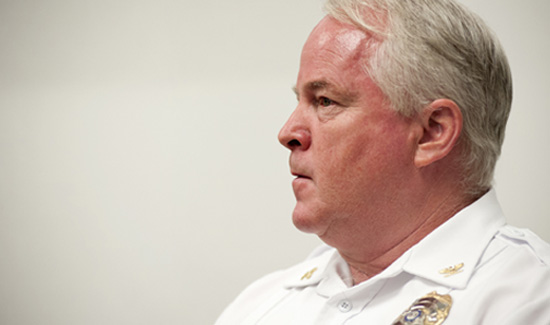 While some have questioned the wisdom of a military policing model over the traditional public safety mission, Col. Belmar said it was really the presence of the armored personnel carriers and other equipment that allowed his officers not to fire on protestors.

According to an article from USA Today, Belmar said, “I think we have to look at this from another vantage point after addressing 200 top law enforcement officers from across the country gathered in Chicago by the Police Executive Research Forum. “Had we not had the ability to protect officers with those vehicles, I am afraid that we would have to engage people with our own gun fire. I really think having the armor gave us the ability not to have pulled one trigger…I think the military uses armor to be able to provide an offensive force, and police departments use trucks like that so they don’t have to.”

“I don’t know how we can responsible we would be as police administrators and not provide our young officers some protection,” Belmar said.

In the closed-door session in Chicago about the Ferguson response that was led by Belmar and St. Louis Police Chief Sam Dotson, there was consensus that police departments need to establish strict guidelines for when and how military-equipment is used, said Chuck Wexler, the executive director of the Police Executive Research Forum.

“When there is a Virginia Tech, when there is a Beltway sniper, when there is a Mumbai, the first responders are going to be American police and they need to know what they are doing with that stuff,” said Milwaukee Police Chief Ed Flynn. “That is going to remain a tension in this business that’s not easily solved by knee-jerk responses to terms like militarization.”

It’s not clear if Chief Flynn meant a “Mumbai-style attack,” or if there are plans to have American law enforcement responding to active shooter incidents in other countries.