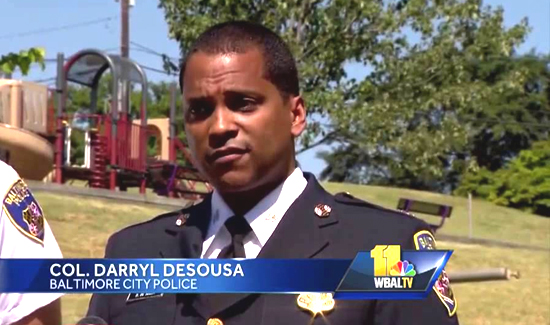 (via WTOP News and The Associated Press)

Baltimore’s mayor announced Friday that the city’s police commissioner has been suspended with pay after he was charged with three misdemeanor counts of failure to file taxes.

The U.S. Attorney’s office alleged a day earlier that Commissioner Darryl De Sousa “willfully failed to file a federal return for tax years 2013, 2014, and 2015, despite having been a salaried employee of the Baltimore Police Department in each of those years.”

If the charges are proven, De Sousa faces up to one year in prison and a $25,000 fine for each of the three counts.

Mayor Catherine Pugh said at a press conference Friday that the suspension is in the best interest of the department, the city and De Sousa personally.

De Sousa issued a statement admitting his failure to file federal and state taxes for those three years, but portrayed it as an oversight. He said he filed his 2016 taxes and got an extension for 2017, and is now working with a “registered tax adviser.”

The city’s police union president, Gene Ryan, said Thursday that the commissioner should “do the right thing by taking a leave of absence” until the federal case is resolved.