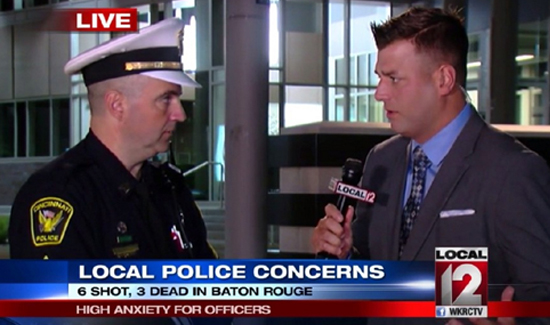 Cincinnati police are investigating a threat made against the president of the Cincinnati FOP—Dan Hils—following a Facebook post the FOP official made last weekend.

Hils said the threats came via social media came after a post he made addressed to Black Lives Matter demonstrators who were protesting lives lost to police violence.

In the post to Support The Blue In Cincy, Hils brought up the 32 black homicide victims in Cincinnati in 2017.

Hils named the victims and suggested protestors add their names to signs they would hold during the march.

“Your Cincinnati PD knows that all lives matter. How about a sign in support of police officers battling this violence?” Hils wrote.

The post, as of Monday at 2 p.m. had 526 shares and 1,200 likes. Hils said he did not believe his post did not contain anything that would elicit a threat in reply.

Sgt. Hils has been a frequent, arrticulate and passionate defender of Cincinnati cops, and has made a strong argument that the media has promoted the distorted perception that officers are targeting people they want to kill.

“It’s all about the ‘narrative’… the narrative that’s out there that policemen are targeting people or that police want to kill people, is a lie, it’s a total lie,” said Sergeant Hils. “And the people out here who are doing a job, people out here are protecting lives, preventing people from dying, and having to live with the fact that out there in the media and out there in politics people are lying and saying that they want to hurt people… and that has to stop.”

So how much added fear is there now in waking up and putting on the uniform?

“We just don’t know where… where do you go where you’re safe?” said Sergeant Hils. “How do we know that somebody isn’t setting up outside of this district to hurt somebody? You just don’t know, and you have to live with that in the back of your head. Somehow you just got to block it and go on.”

We say “enough is enough” a lot these days, but how do we make that a reality?

“It’s the media, the spokesmen of police departments, it’s the people in government and everyone else that has to tell the truth,” said Sergeant Hils. “You can’t use lies for your political narrative and tell people that things exist today that just do not. Policemen are good people and policemen are out here trying to help. They are not out trying to hurt anybody.”