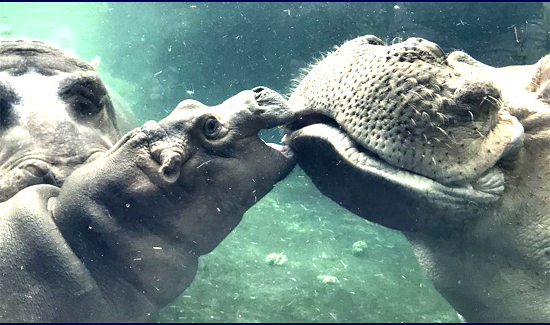 CINCINNATI — A popular baby hippo at the Cincinnati Zoo has been deputized.

Hamilton County’s sheriff and several deputies presented Fiona and her team of caretakers with a certificate on Wednesday naming her honorary deputy sheriff.

It was the second milestone of the week for Fiona.

On Tuesday, her mother Bibi and father Henry joined her for their first time together as a trio.
Fiona has been exploring the outdoor habitat with her mom for several weeks and has had contact with Henry inside, but today was the first time that the three hippos have been together.

The zoo says Fiona was underweight when she born on Jan. 24, coming in at 13 kilograms. She overcame health scares and now weighs nearly 170 kilograms. Her parents weigh about 10 times that.

Video updates such as Fiona taking a bottle, splashing, or running have drawn millions of online views.