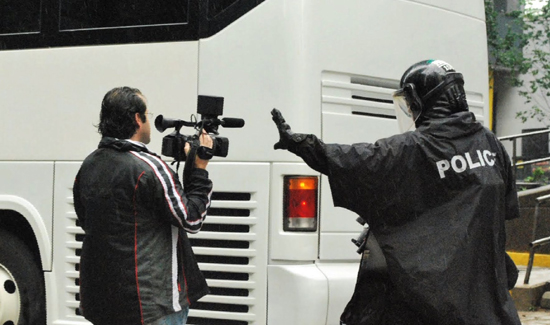 (Ed. note: None of the training or instruction about what the law says about civilians filming police in public in the normal course of their duties seems to have stuck. So be aware—demotions and terminations (see May 2017 issue of APB), not to mention lawsuits—will likely be the way this stuff gets straightened out.)

The city of Gresham (OR) has agreed to pay $85,000 to a woman who was detained by police for video-recording them arresting a stranger on a public sidewalk just outside downtown Portland.

As part of the settlement, police in Gresham and Portland have enacted new policies and training about bystanders’ rights to record their actions in public. The officers were working for TriMet’s transit police unit at the time.

Carrie Medina, the woman who filed the lawsuit, was on her way home from her job at Oregon Health & Science University when she says she saw police tackle a young man and heard someone say, “Ouch, that must have hurt!” on Feb. 12, 2013.

Several minutes after she took out her phone and started to record, she was confronted by an officer who wanted to see her video, she said.

When she refused to let the officer see the video without a warrant, he grabbed the phone from her and twisted her arm, according to a summary of the case by Medina and her lawyers.

Medina sued in 2015 in U.S. District Court in Oregon, arguing that police violated her free speech rights and her rights against unreasonable search and seizure.

On Monday, she, her lawyers and the American Civil Liberties Union of Oregon announced the terms of the settlement. Medina won’t keep any of the $85,000 for herself. The money was meant to pay for her legal fees, but her lawyers at Davis Wright Tremaine represented her for free. Medina is giving all the money to the ACLU for its future legal efforts in other cases.