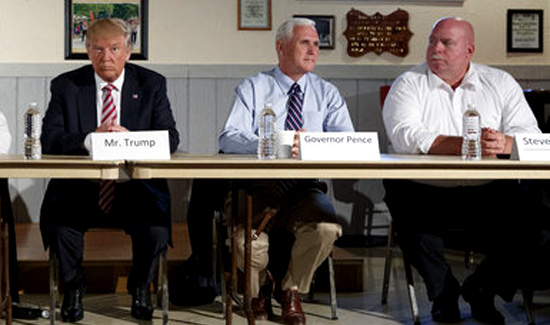 Via the Cleveland Plain Dealer:

Cleveland’s rank-and-file police union’s plan to wade into perhaps one of the most controversial presidential elections in decades and vote this week to endorse a presidential candidate has sparked some division in the ranks.

Many officers predict that members of the Cleveland Police Patrolmen’s Association’s will vote to endorse Republican candidate Donald Trump, whose hardline stances on policing and immigration have sparked outrage and fear within black and Hispanic communities.

A vote to endorse Trump would risk further eroding the relationship between police officers and minority communities at a time when the department is working to rebuild trust after a series of controversial deaths involving police, multiple officers told cleveland.com.

“You’re dealing with a community that is predominantly African-American and Democratic,” Lynn Hampton, president of the Black Shield, the union that represents black police officers, said. “You can’t keep drawing lines in the sand and taking certain stances when the community is as frustrated as it is.”

The Black Shield falls under the CPPA, which represents more than 1,000 patrol officers and detectives.

The board of directors decided Sept. 13 to ask its members at the next general membership meeting to vote on whether to endorse a candidate, according to a letter posted on the union’s Facebook page.

The board’s decision came a week after CPPA President Steve Loomis took part in a roundtable discussion with Trump and other union leaders. And last month, Loomis appeared in his formal department uniform seated behind Trump at a rally in Akron.

Loomis told a cleveland.com later that day that he was invited to the rally by friends, and not the Trump campaign.

After a heated debate where several officers argued that the union should keep its focus on local politics instead of going national, the group voted 25-24 to hold an endorsement vote, Hampton said.

All of the officers who voted to endorse were white, and about half of the votes against endorsing were cast by black or Hispanic officers, Hampton said.

Two other officers, who spoke to cleveland.com on the condition of anonymity because they are not authorized to speak publicly on union issues, confirmed Hampton’s recounting of the meeting.

Officers will cast their ballots for either Clinton or Trump at the union hall Friday, according to the union’s letter.

“This is an internal union issue that is not for public consumption, comment or opinion,” he said in a text message Tuesday.

The news comes after black officers in other cities have publicly decried the decision of the Fraternal Order of Police, the largest national police union, to endorse Trump.

Cleveland police have been working to rebuild trust with minority communities after the city agreed to sweeping reforms as part of a settlement with the U.S. Justice Department to address claims of excessive force.

Trump has made a series of statements that have drawn criticism from black voters.

His years-long questioning of whether Obama was born in the U.S. and has been widely panned as motivated by the president’s race. He has also advocated for tougher policing at a time when police shootings in Cleveland and across the country have spurred protests and widespread calls for reform.

Hampton, a detective with 22 years on the force, decried Trump’s statements in Monday’s first presidential debate for a national return to the controversial stop-and-frisk method of policing, a practice that’s fallen out of favor after a federal judge ruled that New York City police used the stops to unfairly target minorities.

“You’re giving police more authority to operate on their biases, implicit or what have you, and for lack of a better word harass people based on their own stereotypes,” Hampton said. “That’s not going to do anything but further polarize us and the community and cause more problems.”