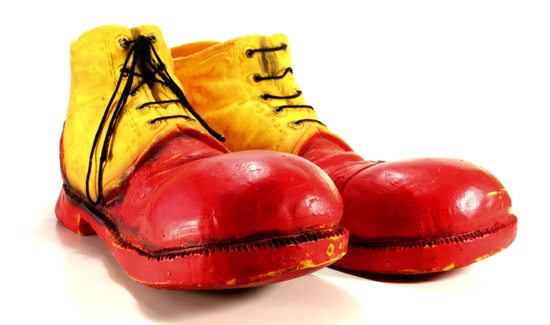 In case you haven’t noticed, what’s old is new again.

The Donald’s going to make Mexico build a big wall on the Southern Border!

What about the wall/fence thing that’s already there? The one we’ve spent $100 billion on?

Who cares? That’s obviously not important or the slogan would be “Build the dang fence/wall—again!”

And what about public safety? Seems like we’ve figured out how to forget how the basics work.

The basics used to be find good candidates, train them at the academy, and give them positions as certified peace officers.

But now, in addition to police volunteers with wildly varying degrees of training (see Oklahoma), we have legions of unpaid, fake tough guys mugging for the cameras at military recruiting centers and other places.

One of the places that unemployed political activists have been drawn to, in order to provide “security,” is the new “No Muslims allowed” gun shop in Florida, where George Zimmerman is now hanging out selling overpriced photocopies of the Confederate flag.

The Muskogee County sheriff said a member of the group guarding an Oktaha, Oklahoma, gun shop accidentally shot himself Tuesday.

Sheriff Charles Pearson said the man dropped his gun and a bullet hit him in the arm. The sheriff did not identify the man or offer any other details about what happened.

“I saw several of those gentlemen out there yesterday,” Pearson said.

“The way they were holding their weapons, with the fingers on the triggers, you can tell a couple of these gentlemen have no idea about weapons safety. It’s like the Clampetts have come to town,” Sheriff Pearson told muskogeenow.com.

It’s not that hard to figure out how we got here—where yahoos with long guns are shooting themselves in order to make gun stores more secure.

What’s less clear is if there’s anything to be done about it.

In a related story, the Oath Keepers said they were planning to arm black protestors in Fergsuon with AR-15s, in an attempt to get police to shoot at them.

No word on any developments as of yet.