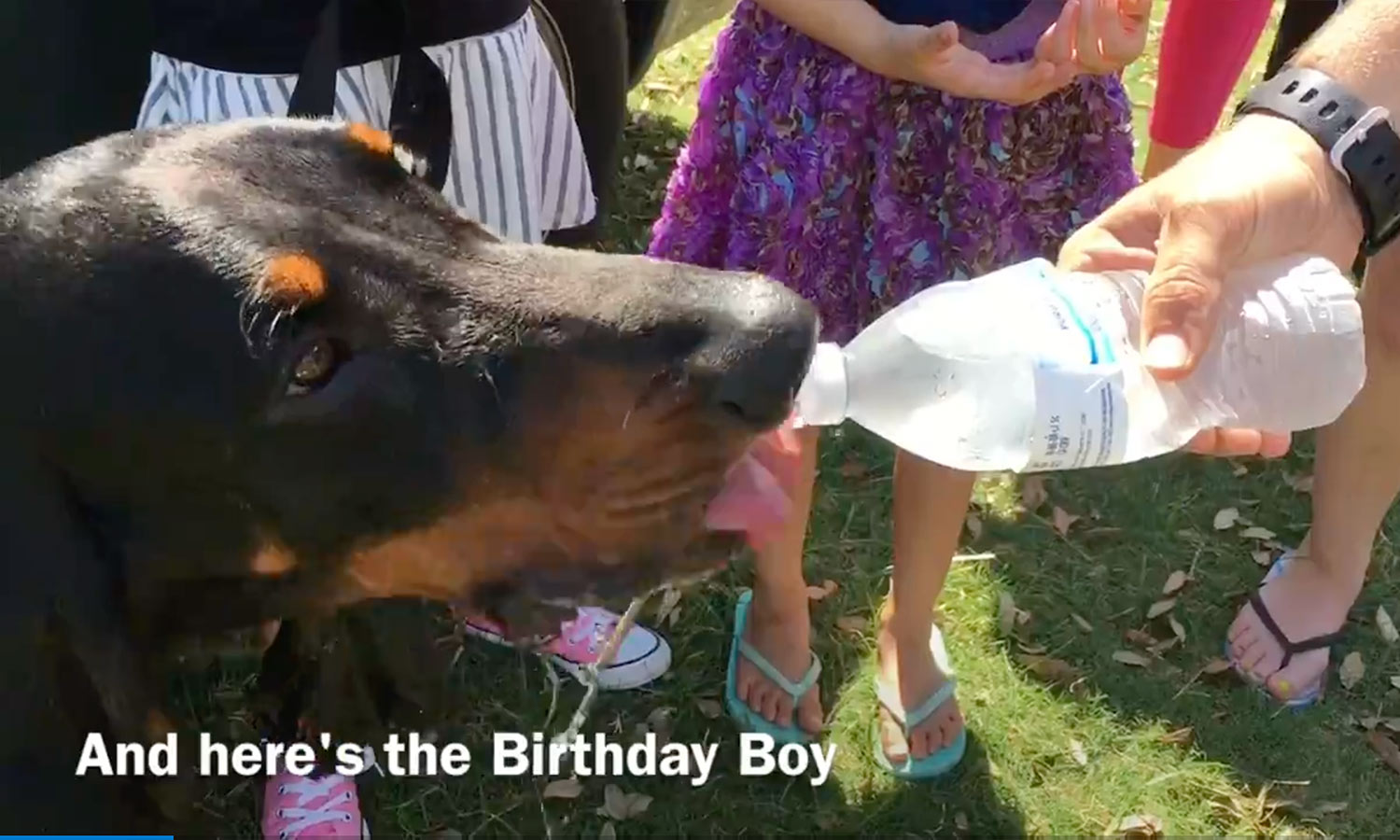 On a hot summer morning, Riverfront Park in Cocoa Village is full of children, and K-9 Copper of the Cocoa Police Department is in his element as his partner, Officer Chris Hattaway, leads him to the playground to say hello.

A little girl approaches the big black and tan coonhound, tentative at first, and her family asks if he is friendly. Copper sits quietly and the adults and children gasp and then grin at the gentleness of a dog such as they never have seen before. Before Hattaway moves away from the playground, one of the young men asks how to join Copper’s nearly 2,000 followers on Facebook.

“This is good practice,” Hattaway says as Copper sniffs the ground and greets old friends. “We’re going back to school tomorrow, our first big day. We weren’t able to spend a lot of time at Cambridge Elementary School last year, so we’re going there and we’ll spend most of the day at Cambridge, unless something comes up.”

“Something” is the need to find missing people or suspected wrongdoers, and Copper does it with aplomb, “a tracking savant,” longtime coonhound breeder-owner-handler-trainer Linda Pincheck of Merritt Island calls him. Or perhaps he will be called on to comfort a crime victim, being a trained therapy dog.

For all these things, Copper, who is not yet 2 years old, has become one of the country’s best-respected law enforcement dogs, and the American Kennel Club has made it official. Having been nominated by the CPD, the dog, whose full name is Oak Hill’s Above and Beyond by BrenMaur, is the 2018 winner of the AKC Humane Fund’s Award for Canine Excellence in the law enforcement category.

It is AKCs top prize for working dogs, and he will be honored Dec. 15 and 16 at the AKC Royal Canin National Championship in Orlando. Copper will receive $1,000, to be awarded to a pet-related charity of CPD’s choice; a one-year policy from AKC Pet Insurance; and an engraved, sterling silver medallion.

He is familiar with the gigantic canine festival because he was shown there last year, but this year, his and Hattaway’s walks around the Orange County Convention Center will be official, and again, he will be taped doing what Copper does.

What Copper does, according to officials of the CPD, is unite the community, teaching children in sometimes-fractious Cocoa that law enforcers are their friends; that a big canine like him can be friendly and kind; and a well-trained dog can have a calming and unifying effect on all around him.

“The biggest thing is that he has brought the community and the police department close together, and interaction with him leads to interaction between the people and the officers,” Chief Mike Cantaloupe says. “Copper has been that piece that we were missing.”

He has a devoted following among Cocoa’s school children.

“Every time I’m out in public, whether I’m working or not, some child will recognize me and say hello, and if they don’t see Copper, they will ask where he is,” Hattaway says. “They are disappointed not to see him. When we arrive at a school, we can feel pure excitement. Then they get really quiet because they really want to listen and learn.”

Copper’s influence stretches through the community, though. He doesn’t only work with children.

“We had a murder happen this weekend, and I was acquainted with a lady whose son was a very close friend of the victim,” Hattaway says softly. “He was like a member of their family, and the mom was taking it very hard. So we met with them Saturday and immediately there were tears. But then Copper went to the lady and she rubbed his ears, and he leaned down and listened to her. He is sympathetic, empathetic, and I think she appreciated that he was there to help comfort her.”

Hattaway goofs with the coonhound, who leaps and jumps and then lies down in the grass, tranquil as ever.

“You know, even when the national rhetoric expresses zero liking for the police, that doesn’t apply to Cocoa, and he’s a big reason for it,” Hattaway said. “Who can’t go up and talk to a cop with a dog? And people who don’t want to know anything about the police? Their kids pull them by the hands and say, ‘Let’s go see that dog. I know that dog. That’s Copper.’”