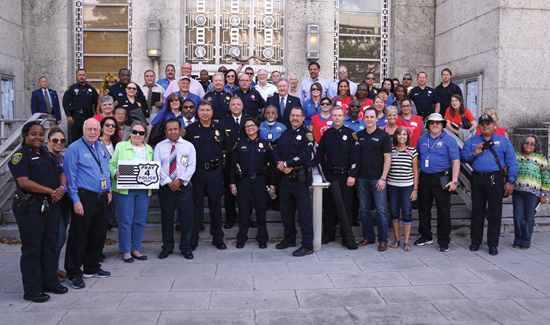 “If you want to effect change, then you better get on in and pray for us. That’s the only way that change is going to happen.”

These words were spoken by the vice president of the Houston Police Officers Union, Doug Griffith, at a recent press conference announcing plans for a statewide event called, “Let’s Pray Texas.”

Houston Mayor Sylvester Turner and other dignitaries talked about why the event was so important and its ultimate goal of bringing the police and the communities they serve back together.

“We held the ‘Let’s Pray Houston’ event last January,” Griffith explained. “And now we’re taking it across Texas. We have reached out to people all across the state – community people, politicians, police unions and departments, and all first responders.”

“This event is not just for people who love and support the police,” Griffith added. “It’s also for the people who don’t support us; the ones who are critical of current law enforcement practices and policies.”

The mayor has been nothing but enthusiastic. He noted that it was a great event for Houston and it’s even greater now it’s gone statewide – police and the people praying together.

The Mayor said, “When I think about what has taken place in the last 11 months like the shooting that took place in West University
area, where nine people were injured, you can see there is a need to pray for one another and for all of law enforcement.”

“Let’s Pray Texas” kicked off with 24 hours of prayer at the Houston police union’s prayer room. Members of the union handed out “Pray for
Police” and “Let’s Pray Texas” wristbands to the groups of people who participated.

“We prayed together – Houston cops and people from the community prayed that we will stay together and stay safe and that the leaders of
our nation and our local communities will be protected from harm,” Griffith said.

While alienating all of us who ever wore a uniform without believing in a supposed all-loving deity who would allow us to die in vain for an ungrateful public.

Keep God out of our government, a police department is -not- a church. I didn’t get through the academy because I believed that there’s a deity who fixes everything… I joined because I know that only human action can correct human indecency.

If there was a God, we’d have no use for anyone to need to be in police work. I love my brothers and sisters in uniform, and don’t mean to be disrespectful. But I think things like this allow people to give credit to an entity that doesn’t bleed, doesn’t work to get drunk idiots safely home so that they can go endanger other people again with their drunken habits.

I’ve never seen a god save an addict by intervening, buying her ice cream and teaching her that life is precious because we only get one shot at the whole thing. I’ve also never seen god freezing his legs off directing traffic so people don’t kill themselves on an interstate turnpike that’s iced over for more than a day.

I am an atheist. And I am proud to have worn a uniform, and helped people of all walks of life, beliefs, backgrounds and so forth… But it has always secretly broken my heart to hear people credit God with actions I took, or with actions others in uniforms took. If there was a deity watching, why did anything bad happen in the first place?

Stay safe, everyone. And remember that you’re not alone. Forever true, forever blue. Loyalty to my brothers and sisters -is- my religion.