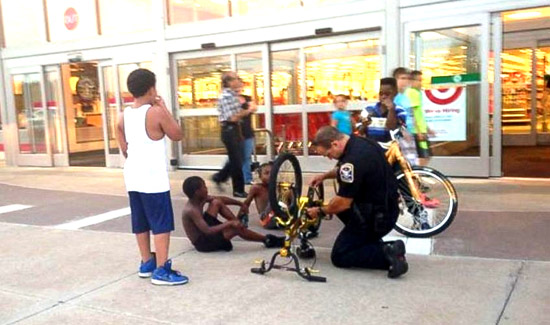 The person most surprised by that photo of a police officer fixing a kid’s bike that’s spreading like wildfire on the Internet? The officer himself.

Castillo, 27, and a three-year police veteran, was called to a local Target Monday night amid a report of a fight outside the store. He says when he got to the store he saw a group of young boys he recognized from the neighborhood.

“I asked if they were fighting and they said, ‘No, we’re just playing … we’re all friends,’” Castillo told ABC News.

The officer saw that one the boys’ bikes was messed up. The chain was twisted.

“I fixed the chain and tightened up the tire and told them, ‘Alright, guys, go play somewhere else besides the Target parking lot,’” Castillo said. “They’re good kids.”