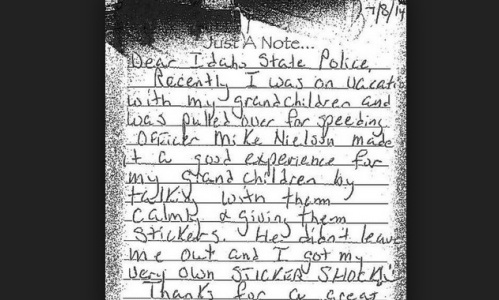 A Florida man who lost his home and his job and was living on the streets with his dog wrote a letter of thanks recently to the Palm Beach County Sheriff’s Office to thank a deputy for taking the time to help him out.

“Officer Alex Alphonso approached me and knew I was not a trouble maker. Just a guy down on his luck. I had to save to get a new place to stay to keep my dog of 13 + years … He and I talked and I eventually got a place, home for my dog (my best friend) and I was then able to pursue work. He helped me change my life for the better to the tenth degree.”

Apparently the deputy did some legwork and was able to get the guy a job at a Bed, Bath & Beyond. He also managed to find a place for the homeless man and his dog to stay.

The officer in question is reportedly now on desk duty pending an investigation into an off-duty shooting. The fact that the cop is now the one that could use some support was what prompted the former homeless man to write the letter.

“I know he had a rough stretch! But I also know District 7 is no picnic. He is patient, cordial and professional.”

With all the negative headlines and animosity directed as police officers it’s nice to know there are still some folks that will take the time to express their gratitude for the difference officers make in people’s lives every day.