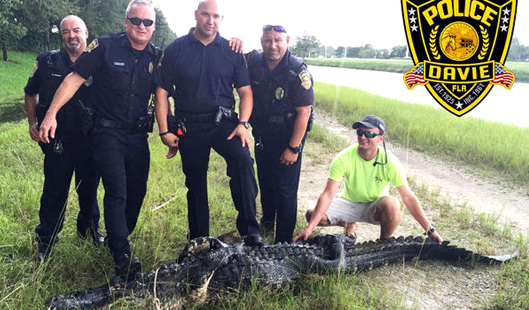 A Florida sheriff’s deputy may have the last name Coward, but he certainly isn’t one.

After Deputy Cameron Coward of the St. Johns County Sheriff’s office spotted a small alligator in a parking lot Tuesday, he took matters into his own hands — literally.

“He was walking through a parking lot and saw the four-foot alligator,” Commander Chuck Mulligan told InsideEdition.com. “The alligator had gotten out on the Fourth of July and was near roadways, so the deputies had a concern for the gator.”

Mulligan said that while officers usually call in the local wildlife commission for large alligators, Coward handled the animal himself.

“He threw a bag over its head. It’s a normal issue to see alligators. He just picked it up and put it back retention pond so it didn’t get hit by a car,” Mulligan said. “Had it been a 10-12 foot one, they would have handled it differently.”

Neither the alligator nor the officer was harmed during the rescue.